John Hurt: A brilliant actor who ‘never lost his sense of adolescent mischief’

In a 2007 episode of the BBC's documentary series 'Who Do You Think You Are?', John Hurt is deeply disappointed when he finds out he does not have Irish ancestry. Video: BBC 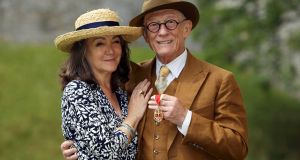 A photograph from 2015 showing Sir John Hurt with his wife Anwen after he was awarded a knighthood by Queen Elizabeth II. Photograph: Getty

Sir John Hurt, who has died at the age of 77, can currently be seen playing a Catholic priest, confessor to Jacqueline Kennedy, in Pablo Larrain’s fine film Jackie.

Diagnosed with pancreatic cancer less than two years ago, the English actor looks shockingly gaunt and worryingly weathered. But the characteristic boyishness remains.

He was always young and he was always old. As long ago as 1966, when he appeared in A Man for All Seasons, you could hear that worn creak in his voice - a rusty gate blown by a light wind - that he exploited to express anger, despair or exasperation.

Yet he never lost his sense of adolescent mischief. In 1983, he exploited that characteristic when playing The Fool to Laurence Olivier’s King Lear. Even as a young man there was, however, something of the weary old madman about him.

Unwitting agent of annihilation in Alien. Already experienced in Midnight Express. Heartbreakingly misused in The Elephant Man. Crafty in The Field. Hurt was among the cleverest actors of his (or any other) generation.

Nobody else can do what he did.

Hurt counts as an honorary Irishman. He lived in the country for 12 years and his two sons regard themselves as Irish. One of his brothers, after converting to the Catholic faith, became a monk at Glenstal Abbey in county Limerick.

During a 2007 episode of Who Do You Think You Are?, the BBC’s genealogy show, he seemed disappointed that he was not related to the Anglo-Irish nobility.

In 2011, he told this writer he was driven by a belief - or a hope - that he was related to his great pal Gareth Browne, the Guinness heir. There was also a family legend that a descendent had been the illegitimate daughter of the Marquess of Sligo.

“The name ‘Browne’ comes into my family. And I wanted to prove Gareth was a cousin,” he laughed. “They thought I was trying to establish some aristocratic background. I was never interested in that.” 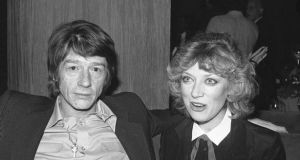 John Hurt A life in pictures

John Hurt was, in fact, born in Derbyshire. He is the son of a clergyman and a mother who, he always believed, might have made a decent actor. He had early ambitions to become a painter and attended St Martin’s Art College in London for a spell.

That was an exciting place to be in the late 1950s, but he remembers being torn apart by “traumas” whenever he saw impressive performances in film or on television. John knew that he needed to perform and, when his grant ran out, he secured a scholarship to Rada.

It took a while for Hurt to become a household name. It always comes as surprise to see him in A Man for All Seasons, beside many actors from an earlier generation. Though he was brilliant as the doomed Timothy Evans in 10 Rillington Place (1971), he didn’t really become a face until his role as Quentin Crisp, self-proclaimed “stately homo of England”, in the ITV production of The Naked Civil Servant. That role won him a Bafta for best actor in 1975. A year later he was brilliantly horrid as Caligula in the BBC’s I, Claudius.

“I often quote that part when I hear those method actors say: ‘Oh, I can’t relate to that,’” he told me. “How could you approach Caligula if you can’t ‘relate’ to something really rather simple? If it’s out of your experience you can’t play it? Nonsense.”

That comment offers a key to his approach. Hurt was wholly committed, but he refused to entertain any pretentious waffle about technique. That dedication was tested to the limit playing John Merrick in David Lynch’s masterpiece The Elephant Man in 1980. He arrived on set at 5am and, after application of complex, weighty prosthetics, would shoot from noon until 10 o’clock at night.

“I think they finally managed to make me hate acting,” he said at the time. Though we never see the actor’s face, that performance - an essay in compassion and courage - stands among the greatest in cinema history.

He won the Bafta for best actor and was nominated for an Oscar (losing, honourably enough, to Robert De Niro in Raging Bull).

A year earlier, Hurt, his creased face usefully tormented, secured immortality as the exploded centre of a science fiction classic. There are many memorable scenes in Ridley Scott’s Alien, but none so astonishing as that which sees a baby alien force its way from John Hurt’s chest.

The Elephant Man and Alien secured Hurt’s position as unique blend of awkward sprite and vulnerable wiseacre. They could have used him in Los Angeles, but he preferred the windy hills of county Wicklow.

Married four times, John Hurt established a reputation as a boozer in his middle years. He was never so promiscuously drunk as Oliver Reed, but the word “hell-raiser” was occasionally flung in his direction.

“All that was a little unfair,” he told me. “The problem was I just didn’t conceal it well enough. All that was just of the period. Everyone drank a lot then. It was the way of the world. You’d do a TV interview and have a drink and a cigarette with you. That gives you a sense of how things have changed. These days, if you order a glass of wine with your meal in America they consider you an alcoholic.”

John gave up drink after marrying film producer Anwen Rees-Meyers in 2005 and claimedhe never missed it.

It was to Hurt’s great advantage that he was never a conventional leading man. Such actors outgrow their good looks and end up playing Ruritanian pretenders in US soap operas. In contrast, Hurt continued to play rugged miscreant and crafty advisors throughout his career. He and Richard Harris (another thespian bon viveur) formed an irresistible partnership in Jim Sheridan’s film of John B Keane’s The Field. As long ago as 1997, he was convincingly decrepit in Love and Death in Long Island.

The unmistakable voice - rich without ever veering towards the archly “theatrical” - was one of the best things in Lars Von Trier’s experimental Dogville. In 2011, he brought a defiant rage against the light to his turn as Control in Tomas Alfredson’s Tinker Tailor Soldier Spy.

Indeed, it is hard to think of any contemporary who did such consistently good work in so many fine films over such a long period. He had good tastes in directors. Directors who had good taste in actors sought him out.

Hugely articulate, very funny, at home to self-deprecation, John Hurt would, no doubt, have laughed at headlines that, this morning, declared a “Harry Potter actor” dead.

(Aside from anything else, he was barely in the series.) There is, after all, too much good work to allow any satisfactory summary in fewer than 15 words. Recognition came with a CBE and a Knighthood.

“I don’t regret many things in life,” he told The Irish Times. That was good to hear. He was among the best screen actors we have ever seen. John Hurt is survived by Ms Anwen Rees-Myers, his wife of 12 years, by two sons and by millions of fans.