It’s Back to the Future day: time for a reality check?

From fingerprint technology to flying cars, just how accurate were the trilogy of films' predictions?

As the world celebrates 'Back to the Future day', Michael J. Fox says 'ironically for a time travel movie, it had timelessness'. Video: Reuters 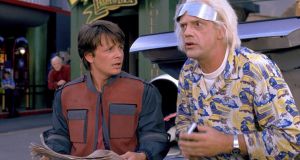 Marty McFly (Michael J Fox) and Doc Brown (Christopher Lloyd) in ‘Back to the Future Part II’: futuristic depiction of this coming Wednesday

Even if you’re not an avid movie fan, knowledge of the Back to the Future trilogy runs on similar lines to knowing the rough outlines of the Indiana Jones, Star Wars or Terminator films – you know some of the storylines, but maybe can’t be specific about each one.

That’s okay – if there’s one thing notable about the Back to the Future movies is that their adherence to logic is ambiguous. Time travel is a tricky enough concept in itself without Hollywood getting in the way, but then – as certain sections of the fourth estate is only too well aware – why let the truth get in the way of a good story?

Released in 1989, Back to the Future Part II picks up where the first movie ended (thank you, Hollywood!): on October 26th, 1985, scientist Doc Brown (Christopher Lloyd) and his DeLorean time machine collect Marty McFly (Michael J Fox) and his girlfriend Jennifer (Elizabeth Shue), and set course for October 21st, 2015.

While in 2015, all manner of timeslip events occur: future selves bump into each other, time machines are stolen and then returned, previous lives are changed in various butterfly effect scenarios. It’s all great fun, of course, and very well conceived and executed (providing you don’t think about the time travel concepts too much).

According to the film-makers (director Robert Zemeckis, screenwriter Bob Gale, and production designer Rock Carter), the greatest challenge facing them in the mid-late 1980s was the futuristic depiction of 2015 – specifically, clothes, houses, technology (social, political and economic areas are barely touched upon). The tone of the Back to the Future movies was hardly dystopian (a la Blade Runner and The Terminator), but how could they really know? Would their predictions seem woefully inaccurate, or would they be able to do what classic sci-fi writers of previous decades (including Arthur C Clarke, Brian Aldiss and Isaac Asimov) had done by astute research, speculative imagination, and adding the results together?

According to Zemeckis (in an interview recorded for the Blu-Ray release of the movie in 2010), “filming the future scenes of the movie were the least enjoyable of making the whole trilogy, because I don’t really like films that try and predict the future. The only one I’ve actually enjoyed were the ones done by Stanley Kubrick, and not even he predicted the PC when he made A Clockwork Orange. So, rather than trying to make a scientifically sound prediction that we were probably going to get wrong anyway, we figured let’s just make it funny”.

Zemeckis is being somewhat disingenuous here, as the movie turned out to be impressively accurate about various technological advances that they predicted would be commonplace in 2015. So what did the film-makers get right?

At various points in the film there are examples of fingerprint technology being used to open doors and to pay for products instead of credit cards. Biometric technology may still seem the stuff of science fiction, but its presence in many areas of society is increasing year on year.

There’s a scene in the 2015 McFly house where we see the family engaging in face-to-face conversations via their television. While the 1960s sci-fi series, Star Trek, had previously displayed examples of wireless communications, this was the first time that such technology had been given a domestic premise. And now? Hello Face Time! Hello Skype!

When Back to the Future II was released we were watching television programmes via boxy, unwieldy cathode ray tube sets. They had to be placed, ideally, in a corner due to their physical dimensions. These days, plasma or LCD (liquid crystal display) flat-screen TV sets are everywhere, but in the late 1980s to see such sizeable screens – mounted on walls, no less – was, frankly, incredible. And very weirdly prescient.

During a dinner table scene, people are wearing video glasses that have the functionality to make and receive phone calls. Google Glass, anyone?

When Marty visits a 1980s-themed cafe, he displays his retro video gaming skills to youngsters, one of whom (a tiny Elijah Wood, at this time in his life much smaller than a hobbit) derides him when he sees him use his hands to shoot-’em-up/shoot-’em-down – “That’s like a baby’s toy!”, Wood’s character sneers. Nowadays, hands-free gaming is becoming ubiquitous. Who would ever have thought, eh?

No, come back! Marty’s Nike tennis shoes with automatic self-tying laces were actually thought by some viewers to be the real thing. They weren’t, of course – seriously, who in their right minds would ever want them? As it turns out, Nike does. In April, 2009, the company filed the patent for self-lacing shoes. Two years later they issued the MAG sneaker (a limited edition recreation of Marty’s footwear – yours for approximately $8,000), albeit without the magic lace-up capability. And now? Nike designer Tinker Hatfield has said that a version of the sneaker with hands-free self-lacing shoes will appear before the end of this year. Our advice? Start saving now.

Flying cars? Don’t be ridicul . . . well, actually, hold on there for a cotton-pickin’ minute . . . While the very notion of flying cars really was the stuff of fantasy back in the 1980s, you probably won’t be surprised to learn that in 2013, private US corporation, Terrafugia, announced the TF-X, a battery-charged, hybrid tilt-motor vehicle that is pitched as being the first fully autonomous flying car.

Currently in development, it is envisaged (in as much as anything can be ‘envisaged’ these days) that it won’t have any commercial potential for another 10 years. Terrafugia, however, isn’t the only company eager for takeoff. Last year at Vienna’s Pioneer Festival, Slovakian manufacturer AeroMobil unveiled a prototype vehicle that can be converted from a car to an aircraft. The vehicle, according to AeroMobil’s chief executive Juraj Vaculik will be available for sale in 2017. Pitched to “wealthy supercar buyers and flight enthusiasts”, don’t expect to see it cheat on M50 tailbacks anytime soon.

So that’s what Zemeckis and friends got, more or less, right. But what did they not predict too accurately? (Or, in all fairness, what they were unqualified to predict?) Here goes:

Undoubtedly the “invention” that piqued the most interest of younger views of Back to the Future II was the hoverboard – in effect, a skateboard that floats off the ground. While attempts similar to hoverboats – which blast air at the ground/water, thereby raising the unit – have been tried, it currently remains a non-runner. However, don’t say that to US company Hendo Hover, which is developing the world’s first operative hoverboard. How does it work? Using four “hover” engines, the device sits about an inch off the ground, a distance created by magnetic fields that “push” the board away. One word: unpractical.

In the film’s version of 2015, the weather is controlled and planned in advance. If only.

In the movie, a CD-sized pizza is placed into a gizmo called the Black & Decker Hydrator. Some seconds later, and hey presto – out comes a fully sized one. The 2015 reality is much different, but be aware that 3D-printed food (a process where layers of food materials are built upon and then super-tightly compressed) has been created for astronauts. Word of advice: don’t bother texting Domino’s just yet.

In a neat movie in-joke about sequels, Hollywood never did get around to making Jaws 19, but then, as the guy at the end of Some Like it Hot said: "Nobody's perfect".