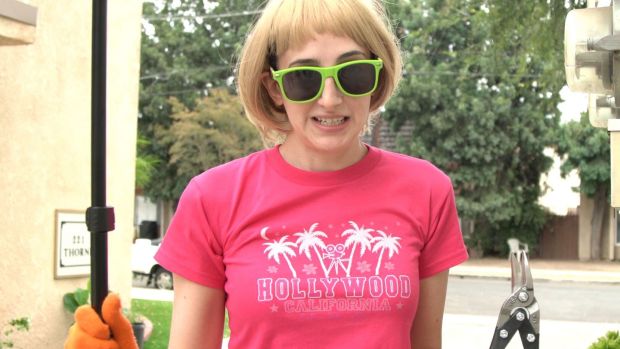 Is it mere coincidence that this broad, messy – and mostly terrific – movie-industry satire arrives to stream less than a week after Promising Young Woman? Nobody fresh from that all-conquering release will fail to register parallels when the protagonist here, after luring some irritating dope into her lair, reveals a stripe of vengeful bloodlust.

Made, for reasons the film itself wearily explains, on a low budget with much help from pals, I Blame Society makes Emerald Fennell’s Oscar-nominated screed seem like a model of narrative discipline. The swing to homicidal derangement is a little too jarring. We need greater opposition in the last half hour. But only a cad would wish the thing to be any more polished. Made within the communities it satirises, I Blame Society thrives on its own crotchety energy.

Also a programmer and critic – well versed in the dynamic of both art house and trash – Horvat works through her own struggles in getting a feature financed. The film ruthlessly drags a current school of independent producer who uses the #MeToo vocabulary as a weapon to further patronise women.

Two young drones speak of wanting a “strong female voice” the way they might talk about needing a “mentor character” or a “third-act reveal”. Once they have such a person checked off the list, they can return to normal practices. They initially object to being filmed but, when Gillian mentions a key post-Weinstein buzzword, they immediately relent. “Oh if it’s for ‘transparency’ then that’s fine.” Just play along and nothing need change.

The character called Gillian – who shares game mother and gamer still grandmother with the real Gillian – is so short of support that she has latched on to the most backhanded of compliments. A friend has suggested that she might “make a good murderer”. Pondering this, she elects to shoot a fake documentary (the wheels within wheels are already whirring) about a woman planning a murder.

Her mother doesn’t believe she would make a good killer. Her grandmother, as grannies will, believes she can accomplish anything she sets her mind to. Gillian settles on her chum’s girlfriend – whom she nicknames Stalin – as the target of her theoretical assassination. Who will miss the “most unkind person” in LA? Not surprisingly, her friends drift away as potential collaborators, expressing bemusement.

Somewhere along the way, Gillian’s plan ceases to be a harmless art house game and becomes a genuine exercise in mass slaughter. Not that she quite sees it that way. “I’m a murderer – not some frenzied serial killer,” she says. She is reluctantly forced to knock off blameless people as a way of distracting the police’s attention, but, for the most part, Gillian is murdering the sort of people who (I’m guessing here) drive the real Gillian bonkers.

With all due respect to our readers in the great city of Los Angeles, nowhere in the world has so many coffee shops filled with so many people droning on about their own challenges and life goals. The guy who works for a health insurance company and wants everyone in Java Express to know about it is marked down for annihilation. So are a few movie professionals.

As you’d expect from somebody who has made much of her living producing extra material for DVD releases, Horvat slips in many self-conscious references to film theory. At one stage, her alter ego, like the worst of movie bores, explains how the plot is now following the precepts of story guru Joseph Campbell.

The killer is always aware that she is (literally) a character in her own film. But I Blame Society is never laboured or up itself. Horvat is as intent on having disreputable fun as she is on deconstructing the late 20th century slasher film. When breaking into a house, Gillian pauses for a consideration of the interior design. “Wow. Is that a landline?” she snarks on spotting a rotary phone. “Okay, Mom!”

The result is an entertainment that, for all its frayed edges, never falters in its delivery of disgraceful, outrageous, tasteless gags. None is better than the three words that, comprising the triumphant last line, could have given the film an even better title than the one it currently brandishes.

An absolute blast (those aren’t the words).