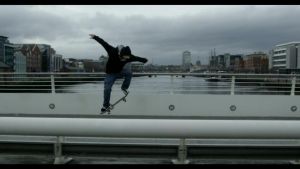 Towards the beginning of this very enjoyable documentary on the skateboarding scene in Ireland, Damien Cody, a veteran of the sport, muses how estranged he and his co-conspirators originally felt.

“It was not normal,” he says. “Dublin is just so far from the origins of skateboarding.”

He has a point. There are differing stories as to the origins of skateboarding, but most agree that it kicked off in and about Los Angeles in the rock’n’roll years. Maybe it was surfers looking for a way to bust moves when the waves weren’t up. Maybe it was valley kids who didn’t live within walking distance of the ocean. Either way, the funk and the sauce of skateboarding is very tied up with the beachside lifestyle.

Like the makers of Waveriders, the 2009 documentary on Irish surfing, JJ Rolfe and his team have dragged up some international celebrities to discuss those distant beginnings. You can’t really have a skateboarding documentary without Tony Hawk and, sure enough, the great man turns up to talk us through the Old Testament.

As we have observed so often in the music scene, the Irish have a gift for making unlikely foreign pop culture their own. Utilising some deliciously nostalgic archival footage (one snippet, date-stamped 1988, shows kids making the best of an improvised ramp), Hill Street addresses the rise of skateboarding during the recession years.

The John the Baptist of the scene (to extend our biblical analogy) turns out to be one Clive Rowen, proprietor of a vital specialist shop on Dublin’s Northside. Like the older Americans interviewed, Rowen has been around long enough to remember manufacturing boards from planks and cannibalised skates. He later brought the scene’s US royalty to Dublin.

Expanded from a version shown at the Jameson Dublin Film Festival two years ago, Hill Street will be an easy sell to aficionados, but there is enough peripheral material here to excite anyone interested in zippier social history. Fairly rad stuff.

Finding the Way Back: A career-best performance from Ben Affleck
3