Goodfellas, Martin Scorsese’s all-out wiseguy whirlwind, is back in cinemas 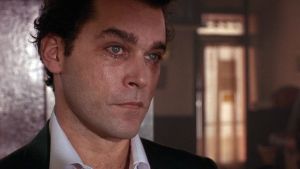 Never mind the deities: everybody has their own personal Scorsese. Ask around and you’ll find true believers who swear that The King of Comedy is the director’s finest work. No, Raging Bull. No, it’s Taxi Driver, you dope. And so on.

Deep down, even the heretics (After Hours? Really?) know that if you had to explain Martin Scorsese to a visiting Martian, you’d reach for Goodfellas, now, happily, re-released and restored some 25 years after its last theatrical outing. Martin Scorsese said he wanted Goodfellas to be an all-out whirlwind: ‘a two-and-a-half hour trailer’.

Sure enough, long before Henry Hill’s frantic drug-powered paranoia kicks in, Thelma Schoonmaker’s masterful cuts, as set to a lively, eclectic jukebox score, give the impression of watching a plate spinning act on a tightrope. Safety net not included, as we swirl through killings and crimes and pasta dishes and women and drugs.

This adaptation of the 1986 non-fiction book Wiseguy by Nicholas Pileggi, who co-wrote the screenplay with Scorsese, quickly becomes a showcase for the filmmaker’s greatest cinematic tricks: flash-cuts, freeze-frames, that crashing Hitchcock-zoom at the diner, the three-minute Steadicam swirl through the Copacabana, and devices that simply don’t work in other movies, notably, voiceover.

The hilarious, profane patois makes more rat-a-tat-tat than Joe Pesci’s oft-used Smith & Wesson – What’s the matta with you? What d’ya call it? The paw? The hoof. Business bad? Fuck you, pay me. Oh, you had a fire? Fuck you, pay me. Place got hit by lightning, huh? Fuck you, pay me. Get the fuck out of here! Not to mention Pesci’s entirely improvised and utterly terrifying rant: “How the fuck am I funny, what the fuck is so funny about me? Tell me, tell me what’s funny!”

You don’t feel the extended running time. The crazy escalation that sweeps us toward the capture and turning of Henry Hill (Ray Liotta) keeps the heart beating right out of your chest. Goodfellas doesn’t end so much as it screeches to a halt.

Hill is condemned to something worse than death by wise guys, worse, even, than jail: life in suburbia. “I’m an average nobody... get to live the rest of my life like a schnook,” he rants, before returning to his egg noodles and ketchup.

“Jimmy was the kind of guy that rooted for bad guys in the movies,” says Hill of Robert de Niro’s quiet murderer. You will too.