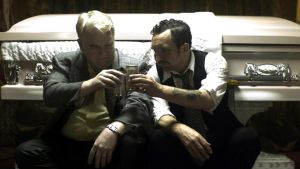 John Slattery, best known as the delightfully lupine Roger Sterling in Mad Men, shakes off the Brooks Brothers sheath and returns to working-class roots for his insanely busy directorial debut.

As actors often do when they move behind the camera, Slattery has managed to assemble a fine cast. Philip Seymour Hoffman’s post-mortem farewell continues with a characteristically damaged turn as a squashed man trying to do his best by a more glamorous, recently bereaved wife. Richard Jenkins works hard at making sense of an archetypal boozed-up journalist (already a romantic notion at the time of Pete Dexter’s 1983 source novel) who angers a whole town with his musings on local scandals. John Turturro, Christina Hendricks and Eddie Marsan are also along for the ride.

Everyone gets at least one good scene, but the cumulative effect of all these rampaging tragedies and outbreaks of black comedy is ultimately rather exhausting. Dexter’s attempts at rust-belt Euripides could have generated a terrific TV series. The plots are, however, a little too tangled to permit straightening out in a tidy 90 minutes.

Slattery takes us to the timeless, working-class enclave of God’s Pocket. This is the blue-collar America that hard-boiled novelists refuse to believe never quite existed. Life still revolves around rough Irish bars and darkly lit stores waiting for immortalisation by Edward Hopper. Low-level hoodlums patrol every alleyway.

The story kicks off when Hoffman’s stepson (played with a demonic lack of restraint by Caleb Landry Jones) gets bludgeoned to death at his workplace. His co-workers cover-up the slaying, but the hero’s wife (Hendricks) suspects foul play. Later there are further random killings, unlikely extra-marital relationships and extended comedy with a dead body that kicks up unexpected reminders of Fawlty Towers. The ending could hardly be more absurd if Venusians arrived to colonise the junkyard.

God’s Pocket gets by on its earthy texture and the strength of its performances. We get the sense that, with less cluttered material, Slattery might develop into a worthwhile storyteller. For now, he is triggering a little too much fanning of overstressed armpits.