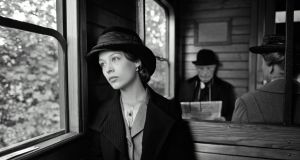 Paula Beer plays Anna who lives with her finance’s parents after his death. 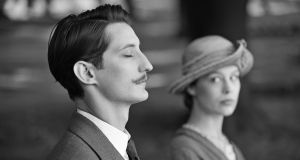 After her fiance’s death in the first World War, Anna (Paula Beer) continues to live with her husband-to-be’s devastated parents, Hans (Ernst Stötzner) and Magda (Marie Gruber) in defeated Germany.

She’s all they have left: Frantz’s body was not returned from the trenches. One day, Anna spies a stranger leaving flowers on his empty grave. Surprisingly, the man, named Adrien (Pierre Niney), is French. When he first calls on Frantz’s father, Hans dismisses him: “All Frenchmen killed my only son.”

Slowly, however, the makeshift family, especially Anna, warm to their Gallic visitor, and delight in his tales of he and Frantz’s pre-war adventures in Paris. But Adrien’s broken demeanour speaks a darker history.

Director François Ozon (Under the Sand, 8 Women, Swimming Pool) remakes the Ernst Lubitsch’s 1932 anti-war classic Broken Lullaby and seamlessly adds a new, poignant third act: all the better to admire the filmmaker’s latest conflicted heroine-turned-detective. Taking cues from the original, Ozon and cinematographer Pascal Marti craft handsome monochrome tableaux, only to blossom into colour during flashbacks and hints of life beyond post-war mourning.

Manet’s painting Le Suicidé looms large in the film, alternately as a clue to possible whereabouts and states of mind. The tragically themed artwork shifts meaning throughout: it is initially and ironically introduced as part of happier times refrain.

Such game-playing is typical for the post-Hitchcockian Ozon, who, throughout Frantz, teases with disingenuous epistolary voiceover and untrustworthy images. One bravura scene inverts the Marseillaise scene from Casablanca with a rousing rendition that is hate-filled, threatening and xenophobic. Even the title serves as a twisty political homonym: France is victorious, but at the cost of Frantz.

A splendid cast work through the complications and stages of grief to provide a scathingly anti-nationalist warning from history.