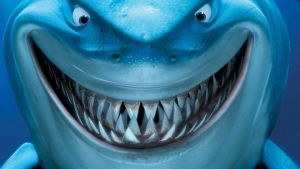 Rather annoyingly, it seems this new 3D reissue of Finding Nemo is only available in 3D. That makes sense, I suppose. The colourised version of It’s a Wonderful Life isn’t available in black and white. Not to worry. If ever there were a film effective enough to distract from the stupid goggles and faintly shrouded screen it is the fifth animated feature from Pixar. That studio has always favoured a subtle, “immersive” school of 3D that fails to thrust spears into your lap. This allows them to retain their dignity and also invites us to pretend we’re simply watching a greyer version of the original film.

Still without a sequel (though one is looming), Nemo is not as ambitious as Wall-E or as groundbreaking as Toy Story or as moving as Up . But it achieves such balance in each of those areas that it easily registers as a front-runner for the studio’s best ever film.

You already know the story. Marlin, a neurotic (Jewish?) clownfish, recently widowed, frets furiously over Nemo, his cheeky son, when the wee chap gets abducted by divers and deposited in an Australian dentist’s fish tank. Dad teams up with a forgetful dory named Dory – one of Disney-Pixar’s best ever sidekicks, voiced gorgeously by Ellen DeGeneres – and, evading sharks and jellyfish, sets out for Sydney Harbour. Young Nemo plans his escape from the tank.

The animation is so sleek and the action so perfectly paced that even the sharpest viewer could be forgiven for overlooking some unimportant lapses in internal logic. If sharks, turtles and tropical fish are anthropomorphised then why do whales and jellyfish come across like, well, real whales and jellyfish? Why are we chastising Marlin for being overprotective when most of his supposed phobias are shown to be well founded? Who taught Dory to read?

Get out of here. You may as well ask who heard Charles Foster Kane say “Rosebud”. A masterpiece for all ages.

Does religion deserve to be treated as a joke?
4

Anne Enright: ‘I looked at how men manage their confidence and took a few leads’
5

David McWilliams: ‘Ireland is three decisions away from being a perfect country’
6