Life in the Free State was no jape, according to Ken Loach's affecting, beautifully shot but somewhat underpowered drama 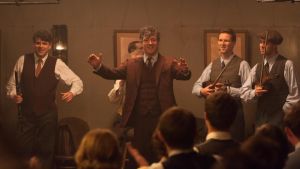 Eight years after winning the Palme d’Or at Cannes with The Wind That Shakes the Barley, Ken Loach, unstoppable director, and Paul Laverty, his regular screenwriter, return to offer one more angry footnote to their evisceration of the Free State’s compromises in the years following independence.

Adapted from a play by Donal O’Kelly, Jimmy’s Hall focuses on one of the more bizarre outrages perpetrated during the new nation’s mewling years. Jimmy Gralton, a spirited socialist from Co Leitrim, must be the only man deported from his own country for supposed sedition.

As the film tells it, in the 1930s, Mr Gralton, recently returned from New York, decided to make something of the local Pearse-Connolly Hall. He set up classes (thereby, cutting into the Catholic Church’s monopoly on education). He allowed dancing to this satanic new jazz music (thereby, cutting into the state’s moratorium on fun). After run-ins with the priests and the police, he found that his US passport might permit a hurried dispatch back across the Atlantic.

Jimmy’s Hall is beautifully assembled. The inestimable Robbie Ryan, using natural light, shoots the luscious scenery with a vibrancy that offers diverting counterpoints to the film’s pessimistic worldview. The largely unknown Barry Ward is a revelation as Gralton. With a less charismatic actor in the role, it would be hard to understand why the citizens found Jimmy so invigorating and the establishment found him so infuriating.

The film posits a slightly throwaway romance with the hero’s old flame, Oonagh (a strong Simone Kirby), but the relationship that really matters is the one between Jimmy and the terrifying, authoritarian Fr Sheridan (Jim Norton).

It was amusing to note how none of the US and European reviews from Cannes last week pointed up a particular cultural association that Irish viewers will find unavoidable. Norton is not quite reprising Bishop Brennan from Father Ted, but the priest has the same sense of divine authority – and the same instability of temper.

Unfortunately, the interactions between the two rivals seem slightly half-formed. By the close, we are given the impression that some sort of mutual respect has grown up– think of De Niro and Pacino in a less hectic Heat –, but little evidence is offered as to the source of those divided feelings. We are left to assume that, in a world of compromises, each recognises the other’s conviction.

Jimmy’s Hall also suffers from a simple lack of plot. If you’ve seen the trailer then – though it is still worth turning up for the fleshing out – you have a pretty good idea what happens in the picture. The returning hero sets out on his scheme. The authorities fights back. It ends badly for those who matter.

One imagines that the play made coups de theatre of the dancing, fighting and rousing speeches. The film desperately requires a few more starling reveals and hairpin reversals. And Loach needs to take more care with his non-professional actors; at least one delivers lines in the manner of an inexpressive speak-your-weight machine.

For all that, Jimmy’s Hall remains a pleasingly humane work that directs its anger at all the right targets. As was the case with Barley, writer Laverty seems more enraged by the Irish State’s betrayal of socialist ideals than by the expected brutality of the former colonisers. The least attractive character in the film is a former IRA man (a predictably excellent Brian F O’Byrne), now happy to enforce the new reactionary orthodoxy.

If Jimmy’s Hall really is Loach’s last dramatic feature – he’s still being a bit coy on that topic – then, though not among his very best, it will stand as an appropriate last hurrah. You’ll laugh and you’ll fume. That is what we’ve come to expect.