Film choice: Night Will Fall - too important to miss

Andre Singer film tells the remarkable story of the footage shot by the Allies of Nazi Concentration Camps in 1945, and how it took 70 years to make it to screen 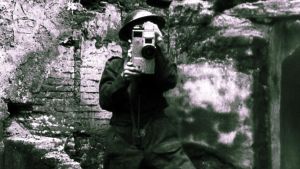 As the Allied forces battled their way toward Berlin in 1945, the Supreme Headquarters Allied Expeditionary Force decided to create an extraordinary document of occupied Europe’s liberation. The film, shot by embedded newsreel cameramen and combat photographers drawn from the ranks of the British, American and Soviet armies, would constitute a “German Concentration Camps Factual Survey”, a powerful tool for teaching, propaganda and for enabling future prosecutions.

Working with Britain’s Ministry of Information, producer Sidney Bernstein assembled a crack team, including editors Peter Tanner and Stewart McAllister, writers Colin Wills and Richard Crossman, and Alfred Hitchcock, who returned from the United States to help craft a feature film from many reels.

Sadly, politics would get in the way. Seven decades later, Andre Singer’s first-class documentary uses Hitchcock’s notes and testimony to glimpse the film he might have made, while simultaneously chronicling the story behind the film. Nobody, including the cameramen interviewed here, had realised just how harrowing the images from Bergen-Belsen, Dachau and Auschwitz would be.

As the Allied forces changed focus from retribution to reconciliation, Bernstein’s project fell out of favour, although some of the footage did enable Nuremberg war crimes prosecutors to convict Nazi war criminals. There were additional complications across the Atlantic. Bernstein and his editing team were determined to be thorough, but the US government grew impatient and commandeered the footage that would become the basis for Billy Wilder’s short, sharp film, Death Mills.

Director Andre Singer deftly cuts between contemporary interviews and original material. Camp survivors are introduced before we cut to their skeletal, scarcely human features at the moment when Allied troops roll in. Cameramen talk of disassociating themselves from the horrors they witnessed. Editors speak of looking at the images in negative, a flip that only serves to emphasise the hollows and grooves between bones.

It is difficult to imagine that there’ll be a more important film this year. Don’t miss it.