Review: The stunts and fights form a pleasing flow in an adaptation of graphic novel Ciudad 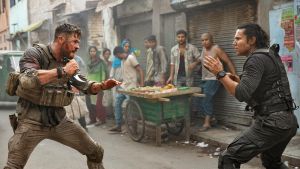 The blurb for Ciudad, a 2014 graphic novel written by Ande Parks and the Russo Brothers, runs thus: “She was kidnapped and taken to the worst place on earth. He was hired to get her out. Now, they’re both trapped in a city that wants them both dead, and their hopes of getting out are fading fast.”

This film adaptation has swapped Mexico for a bustling, spectacular India (with additional location work in Thailand and Bangladesh) and the damsel in distress for the young son of a mobster.

The shadow of the Avengers casts long over the project. Joe Russo adapted the script and his brother Anthony co-produces, Thor takes the central role, and the director is Sam Hargrave, one of the Marvel Cinematic Universe’s primary stunt co-ordinators. Remember the amazing elevator scene from Captain America: The Winter Soldier? That’s the chap.

Tyler Rake (Chris Hemsworth), is a manly mercenary who undertakes the deadliest extraction of his career when he is hired to rescue the kidnapped son (Rudhraksh Jaiswal) of a crime lord. Naturally, the boy and his rescuer bond, and, of course, there is more to the mission than meets the eye.

As the film-making career of John Wick’s Chad Stahelski demonstrates, letting the action co-ordinators direct the action is a good plan. (For a time, Stahelski was attached to Ciudad.) Chris Hemsworth jumps off a building and – good grief – Hargrave jumps after him with a camera. One thrilling 12-minute tracking shot segues from street-fighting to a car chase to an explosion.

The stunts and fights form a continuous, pleasing flow, one that is more than a little indebted to The Raid. Director of photography Newton Thomas Sigel makes great use of the settings. Sadly, every pause for breath and plotting is a slump. Supporting characters, including an agent played by the wonderful Golshifteh Farahani, never get much of a look-in.

There’s a trade-off to reckon with, too. Making a mid-budget action film without a Hollywood star attached is probably beyond even the Russos. But while the director and his star do great work escaping from dozens – nay hundreds – of bad guys, there’s no escaping the film’s “white saviour” optics.

Extraction is on Netflix from April 24th