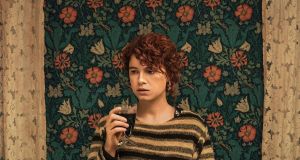 The Dublin Film Critics Circle (DFCC) has announced the results of its poll to find the greatest cinematic achievements in an unusual year for the medium.

Best film went to Céline Sciamma’s powerful romantic drama Portrait of a Lady on Fire. Noémie Merlant and Adèle Haenel star in the tale of a 19th century noblewoman falling for the artist who has been hired to paint her portrait. “The emotional pay-off is so significant that the film takes on the quality of a courtship ritual,” The Irish Times noted after its premier.

Bong Joon Ho won best director for his work on the universally praised Parasite. That film became, 10 long months ago, the first in a language other than English to win best picture at the Oscars.

Though released theatrically here in 2020, both those films premiered over a year and a half ago at the Cannes film festival. Parasite, a South Korean production, still emerged early enough to become the highest grossing “foreign language” film ever at the combined UK and Irish box office.

Portrait of a Lady on Fire got only a few days before lockdown hit, but proved a popular repertory title when cinemas reopened.

“Yay, that’s amazing!” Moore told The Irish Times when informed of the DFCC’s decision. “I love when a cartoon gets mentioned in best film categories because we are usually relegated to the kiddies’ table. I really appreciate the critics’ circles and that is nice news at Christmas.”

Following a young English girl as she interacts with lupine shapeshifters during the Cromwellian invasion, the film received ecstatic reviews and is seen as a certainty for an Oscar nomination in the best animated feature category.

Jessie Buckley, the Kerry actor who began the year with a storming performance in Wild Rose, took best actress for her turn as confused, intertwined personae in Charlie Kaufman’s intellectually taxing I’m Thinking of Ending Things. A Netflix production, that film was always going to premiere online.

“I can’t tell how happy I am to have Jessie in the movie,” Kaufman told this writer in February. “I saw her in this movie Beast and she was unlike anything I’d ever seen before.”

Adam Sandler has, to this point, not much troubled the DFCC, but he romped home as best actor for Josh and Ben Safdie’s rampaging, cacophonous Uncut Gems. Sandler plays a diamond dealer trying to salvage his business as friends and enemies circle menacingly.

“He is a fascinating guy, a very unique person,” Ben Safdie told The Irish Times. “He has a burning desire to overwhelm himself with something inspiring. But he is also a very private person.”

Uncut Gems was also a Netflix release, as was David Attenborough: A Life on Our Planet, which won best documentary. The streaming service was sure to profit in a time when theatrically releases were so sparse.

The DFCC’s breakthrough award went to the Welsh actor Morfydd Clark for her performances in arthouse horror Saint Maud and Armando Iannucci’s The Personal History of David Copperfield. That Dickens adaptation, which also won best screenplay, was the only film to be mentioned twice. It is, perhaps, a little underappreciated elsewhere.

The DFCC, whose president is Tara Brady of The Irish Times, comprises full-time critics working within the capital. In addition to its annual awards, it presents a range of prizes at the Dublin International Film Festival.

Best Film: Portrait of a Lady on Fire

Best Documentary: David Attenborough: A Life on Our Planet