Dennis Quaid: No dog was harmed in the making of this movie

When allegations surfaced of ill-treatment of dogs on Dennis Quaid's latest movie, the actor and campaigner had to snap back

In 'A Dog's Purpose' directed by Lasse Hallström a dog is reincarnated four times on his journey to finding the meaning of life, in a heart-warming comedy starring Dennis Quaid. 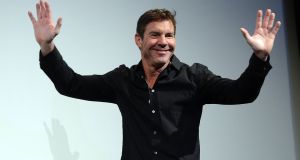 The Texan-born actor Dennis Quaid is firmly in the canine camp on the matter of cat v dog. As a boy, he enjoyed the company of Gertrude, a dog he recalls as a "sweetheart; she went with me everywhere and could practically read my thoughts".

These days, he shares a homestead with Batman and Gidget, two French bulldogs. So nobody was more surprised than Quaid, when, last January, a horrific video emerged from the set of his adorable new family movie, A Dog’s Purpose.

The footage, which appeared on the entertainment site TMZ, purportedly showed a German Shepherd stunt dog being forced into water.

Months later, and Quaid is sitting in a London hotel, still shaking his head in disbelief. “I was on set,” he insists. “There were no dogs harmed on our set. I wouldn’t be here publicising the film if there was. That’s for damn sure. Someone had surreptitiously used their camera phone and spliced the material together. But I watched all of the footage that was shot that day with that dog. And there’s a platform under the dog and two divers with him. He was never in danger. Not only that but when they did pull the dog out of the water, he ran around the other side and jumped back in again. He was eager.”

If they really believed that a dog was being harmed, then why would they wait that long?"

The story still managed to hurt the film’s US release. Peta called for a boycott. Universal, the studio behind A Dog’s Purpose, cancelled the movie’s premiere and press junket so they could review the footage. The film opened to a respectable $18.4 million, but shy of earlier box-office estimates.

“Somebody edited that footage and then waited 10 months,” says Quaid. “If they really believed that a dog was being harmed, then why would they wait that long? Why wait until just before the premiere? And why sell it to TMZ?  I went on a big campaign about it in the States, and I hope we turned it around. Because I just thought it was really wrong.”

Quaid, 63, is accustomed to campaigning. In 2007, the two-week-old children of Quaid and wife Kimberly – twins Thomas Boone and Zoe Grace – were among three patients accidentally given 1,000 times the common dosage of a blood thinner at Los Angeles’ Cedars-Sinai Medical Center. He has subsequently become a patient-safety advocate, co-authoring a 2010 paper that appeared in the Journal of Patient Safety, and producing two related documentaries, Chasing Zero and Surfing the Healthcare Tsunami.

“I guess I always had that kind of brain,” says Quaid, who testified before the United States House Committee on Oversight and Government Reform, in 2008, asking US Congress not to pre-empt the right to sue drug manufacturers for negligence under state law.

Within a week of joining Mr Pickett’s class, I knew what I wanted to do with my life"

“But I was unaware of this situation until what happened to my twins. That really woke me. I started meeting other people with similar stories. And I started researching and came to find out how many similar accidents happen in hospitals. And that they happen all the time.”

Quaid has long possessed a dormant scientific gene. He was thinking of becoming a veterinarian, and had spent several summers assisting a local vet, before he began to enjoy watching brother Randy during play rehearsals at high school. Both siblings decided to attend the University of Houston because the theatre professor Cecil Pickett taught there; Pickett would also teach The Big Bang Theory’s Jim Parsons and Star Trek’s Brent Spiner.

“My dad was a bit of frustrated actor as well,” says Quaid. “He loved movies ad he was always doing shtick. My third cousin was Gene Autry. Within a week of joining Mr Pickett’s class, I knew what I wanted to do with my life. And Randy had gone to LA four years ahead of me. So I thought: ‘wow, this is possible’.”

By the mid-80s, on a roll that included Breaking Away (1979), The Right Stuff (1983), The Big Easy (1987), and Innerspace (1987), Quaid the Younger had established himself as a genuine movie star, capable of weathering the odd misstep (Great Balls of Fire, Jaws 3D). He still gets recognised on the street for these roles.

A career lull in the early 1990s coincided with a heavily publicised cocaine addiction and an eating disorder which Quaid developed while preparing to play Doc Holliday in Wyatt Earp.

I tell all my kids. Find something that you love to do. And figure out a way to get paid for it"

“Doc Holliday had tuberculous,” he says. “That was an important part of the story. It made him one of the best gunfighters because he would stand there, calmly, knowing that he was dying anyway. Take aim. Shoot. No matter. I wanted to really get inside this man who was a looming figure in western lore for me. I’d seen Kirk Douglas play him. So I just wanted to do him right. But I lost way too much weight. That’s when I stopped taking my work home. I learned you’ll do a better job if you drop it and leave it. Even between takes. Walk away. Watch TV. Do a crossword puzzle.”

Like many actors of his generation, he has, of late, drifted toward blockbuster television, playing Bill Clinton in Peter Morgan’s The Special Relationship (2010), and heading up the casts of Nicholas Pileggi’s Vegas (2012) and The Art of More (2015), as well as a series two of Fortitude.

“What’s happening in television is akin to what happened to Hollywood in the early 70s,” he says. “It’s the same change we saw when the American new wave started producing movies like Easy Rider and Five Easy Pieces. Studio output is shrinking. They’ve gone from making 30 movies a year to 10. The Academy Award winners are being made elsewhere. But TV is telling different stories with different heroes. It’ll be interesting to see how Hollywood responds.”

Perhaps inevitably, Quaid’s son Jack, 24, made his film debut as Marvel in the film The Hunger Games. “His mother is Meg Ryan, too,” smiles dad. “So it’s in the DNA. I never encouraged or discouraged it. But by the time he was four he had a little video camera and was making up stories. Like I tell all my kids. Find something that you love to do. And figure out a way to get paid for it. Then you probably have a third of your life figured out.

The Perfect World of Miwako Sumida: Secret lives in Japan
7

The Music Quiz: Which U2 video features an appearance of Boyzone?
9