Daughters of the Dust: the film that inspired Beyoncé’s Lemonade 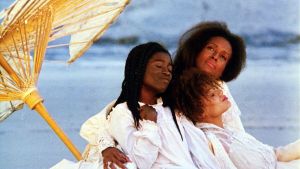 Daughters of the Dust: an extraordinary film which augurs contemporary voguish debates within feminism and Afrocentrism

Film Title: Daughters of the Dust

You can thank the Beyhive. In 1991, Julie Dash’s lavish, poetic Daughters of the Dust became the first movie directed by a black woman to get a wide theatrical release. Made for $800,000 (funded by PBS’s American Playhouse), after every studio had turned Dash down, this extraordinary film augurs contemporary voguish debates within feminism and Afrocentrism.

It’s depiction of mocambo life, of an enclave beyond slavery pre-dates the resistance narratives of 12 Years a Slave, Django Unchained and Birth of a Nation by decades. The film, too, is a mocambo, a startlingly unique piece of storytelling that tears up the rulebook: “I didn’t want to tell a historical drama about African-American women in the same way that I had seen other dramas,” said Dash in the making-of doc Touching Our Own Spirit (2000).

“I decided to work with a different type of narrative structure… the typical male-oriented western-narrative structure was not appropriate for this particular film. So I let the story unravel and reveal itself in a way in which an African Gullah would tell the story.”

Against expectation, Dash’s non-linear film is both accessible and quotable. Daughters of the Dust has gathered canonical momentum since its original 1991 release: it was selected for preservation at the US National Film Registry in 2004, and has inspired several books, including a sequel, written in 1997. It’s reappearance in cinemas is, of course, largely down to Beyoncé’s Lemonade. The visual album liberally pays homage to Daughters.

Once again, Dash’s tale about a Gullah family in 1902 is bang on trend. (Now if Queen Bey could produce the second feature Dash never got to make, we’ll be sorted.)

In an era when women account for just one third of speaking roles, it’s still striking to sit through a work wherein the majority of close-ups in the film are on the women, and most of the dialogue is spoken by women and girls. The Peazant family have lived on Gullah island since their ancestors were brought there as enslaved people centuries ago. They retain West African customs and a unique creole dialect, but the community is varied enough to include a Muslim and a Native American.

As the film opens, many of the islanders are preparing to migrate to the mainland. Girls play in trees. Men talk on the beach. Family members, including the religious Violet (Cheryl Lynn Bruce) and the returning highly sexed Yellow Mary (Barbara-O), bicker. An unborn child – the future daughter of Eli (Adisa Anderson) and Eula (Alva Rogers) – narrates.

Eli is conflicted as Eula has been raped by a white man on the mainland and Eli does not know if the child is his. The island’s matriarch, Nana Peazant (Cora Lee Day), scoffs: “You can’t get back what you never owned. She never belonged to you. She married you.” The others worry about Nana remaining on the island “… like she’s somebody who ain’t got no people”.

The younger generation no longer wish to be “like those old Africans off the boat”. The look toward modernity. “The newspaper said it was a time for everyone; the rich and the poor, the power and the powerless.’

White dresses, indigo dyeing, and azure skies make for an extraordinary aesthetic – cinematographer Arthur Jafa won the top cinematography prize at Sundance in 1991. Dreamy and musical compositions from John Barnes (not that John Barnes: don’t expect the Anfield Rap) add to the visual poetry. Dash drew on her own family history to fashion Daughters of the Dust and throughout, there’s an unshakable sense that the viewer is being called to bear witness. Heed the call.

Westlife’s fans across Africa: ‘I listen to them every day’
7