Cherry: So what do you do after Avengers: Endgame?

Review: Make a dreary crime drama in your hometown, say the Russo Brothers 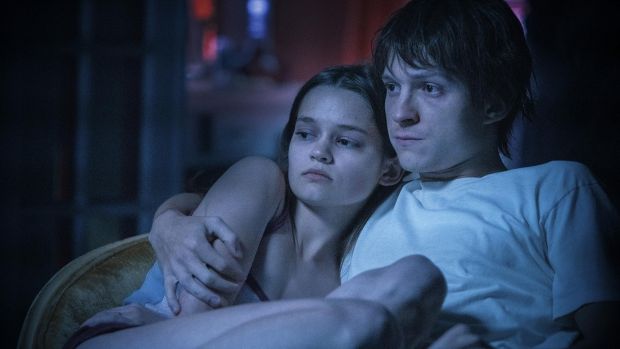 So what do you do when you’ve just made the highest grossing film in history? Robert Wise followed up The Sound of Music with the grand folly that was The Sand Pebbles. Francis Ford Coppola exploited his credit from The Godfather to make the imperishable The Conversation. Reeling forward from Titanic, James Cameron got somebody to hold his pint while he made, well, the highest grossing film in history again.

The Russo Brothers, directors of the all-conquering Avengers: Endgame, have built upon a “semi-autobiographical novel” by Nico Walker to tell a tale of the US’s indifferent treatment of combat veterans and its inadequate response to opioid addiction. The boys deserve some pats on backs. Returning to their native Cleveland – setting for their breakout Welcome to Collinwood – Anthony and Joe have made honest efforts to engage with serious issues.

Tom Holland, our current Spider-Man, fights gallantly with his clean-cut boyishness to convince (just about) as a juiced-up Iraq War vet propelled by addiction into bank robbery. The less well-known Ciara Bravo is better still as the protagonist’s equally strung-out girlfriend. Our own Jack Reynor enjoys himself greatly as a disreputable associate nicknamed “Pills and Coke” (need you hear more). The rising Fionn O’Shea is there on the outer rim.

For all that good work by a strong cast, the word that hangs over this overlong film is sluggish. It doesn’t help that Holland delivers endlessly unenlightening voiceover through virtually every scene. We see what’s happening right after we’ve been told it’s about to happen – as if the “audio description” option has been left on as default setting.

Moreover, the Russos can’t decide how much they are heightening their version of reality. Much of the film plays as dirty naturalism. Elsewhere, we encounter a doctor called “Dr Whomever” and an institution called “Shitty Bank” (get it?). It’s as if we’re veering drunkenly from the world of GoodFellas to the world of Natural Born Killers. They really needed to pick a lane.

That description does not, alas, convey the overwhelming dreariness of this Apple TV release. Perhaps unsurprisingly, film-makers who have made billions from operatically staged violence break out of the morass only during the kinetic combat sequences. This central section is bookended by a clatter of incident – robberies, drug binges, mental breakdowns – that refuses to arrange itself in any sort of digestible pattern.

Van Morrison songs land randomly (what exactly does Into the Mystic have to do with basic training?) Opera underscores opiate oblivion. Everyone involved is trying awfully hard, but the fog of ordinariness just won’t shift.