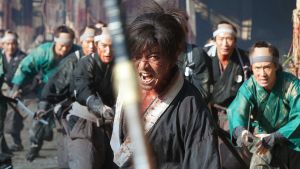 Film Title: Blade of the Immortal

Get your shuriken on. Adapted from Hiroaki Samura’s eponymously titled manga, Blade of the Immortal follows the cursed (possibly blessed, but mostly cursed) samurai Manji (Takuya Kimura), a dying ronin who is made ageless by the sacred bloodworms of an 800-year-old witch. (Do stay with us – the bloodworms make for awesome SFX).

Fifty years after this vampiric interaction, and Manji, still grieving the loss of his sister, is approached by a young girl, Rin (Asano Hana Sugisaki) who wishes to hire the deathless depressive as her bodyguard and as a handy assassin. Rin seeks revenge for the death of her parents at the hands of the Itto-ryu, a murderous kenjutsu school led by fabulous fundamentalist Kagehisa (an androgynous, scene-stealing Sota Fukushi) with a goal to eradicate all other styles of swordplay.

It sounds petty, but hey, they’ll throw down over a lot less during the mid-Tokugawa shogunate. Limbs are duly hacked, shurikens fly, maces swing and swords clang as Manji slashes his way through hundreds of enemies.

For his 100th film, director Takashi Miike – the dazzling, rebellious talent behind such transgressive treats as Ichi the Killer – eschewed extensive rehearsals and careful choreography is favour of spontaneity and bedlam.

The purposefully chaotic results make for a movie that isn’t as fluid or western-friendly as the filmmaker’s swashbuckling 2010 remake of 13 Assassins (never mind such graceful genre classics as Chushingura). Rather, the frenzied, bloodied Blade of the Immortal is an ideal prospect for seasoned chambara and comic book aficionados.

An imaginative, gory, frenetic samurai carve-em-up, there’s an irresistible energy about the project from the get-go. Kimura and Sugisaka are a terrific team. Against the commotion, Koji Endo’s score is unexpectedly nuanced. And cinematographer Nobuyasu Kita deftly and persuasively cuts between hand-to-hand (or hand-to-blade-to-blade) combat and vast scenes of carnage.

The undisputed corpse pile-up of the year and an appropriately splashy century for one of contemporary cinema’s greatest filmmakers.