Best review: a fair appraisal of the sad, messy life of a footballing legend

Daniel Gordon’s documentary about George Best keeps its eye on the football, not the trainwreck, and prints the legend, mostly

The official trailer for 'Best (George Best: All By Himself)', a look at the life of legendary Manchester United and Northern Ireland footballer George Best. Video: Dog Woof 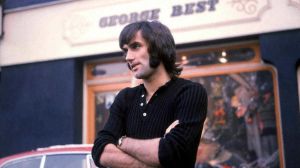 George Best was just 15 when he first left Belfast for Old Trafford; he was 17 when he made his Manchester United debut; he was 19 when he scored two goals in a European Cup quarter-final match against Benfica.

At 27, having helped power the Red Devils to two league titles and a European Cup, while sinking further and further into alcoholism and depression, he retired. In Daniel Gordon’s engaging new documentary, a miserable, sozzled Best tells the press pack that have followed him to Spain that he needs help.

Gordon’s film carefully contextualises the Belfast Boy’s downward spiral into depression. Here was football celebrity on an unprecedented scale. There are multiple scenes of El Beatle – as the Portuguese press dubbed him – surrounded by hundreds of adoring young fans.

These were very different times. Until Best got married, Manchester United required him to stay in digs. At the peak of his fame, he builds a modernist house, regardless. He comes to do quite a lot of things, regardless. Time and again, Matt Busby plays the kindly headmaster to his talented truant.

Director Daniel Gordon has previously caught up with the 1966 North Korean World Cup finalists in The Game of their Lives (2002) and has sensitively interviewed the brave surviving family members of those who died at Hillsborough in last year’s BBC doc.  It’s hard to think of anyone who might be better equipped to untangle the sad, messy life and career of footballing legend George Best.

Don’t expect many revelatory details from this fond, fair film. Best does not feature contributions from Denis Law, Bobby Charlton and Callum Best (who is reputedly working on his own documentary). Nor does it dwell for long on Best’s last, ignominious years, the drunken chat-show appearances or the beauty queens.

There is an illuminating account of the footballer’s erratic American career, but rather less information about his post-US zig-zagging between the Hong Kong Rangers, the Brisbane Lions and Nuneaton Borough (among others).

These omissions are offset by frank testimonies from ex-wives and partners Angie, Alex, and Jackie Glass (who is now a Buddhist nun). Best keeps its eye on the football, not the trainwreck, and prints the legend, but not without certain important caveats.