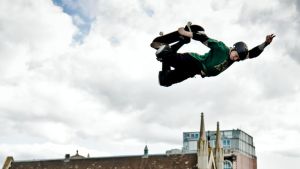 Film Title: All This Mayhem

Let us take the unusual (and overdue) step of singling out significant contributions by a film editor. Too often, documentaries are reviewed as if, like a snake shedding its skin, history allowed the film to fall organically from its back. What is discussed is the story and the story alone. Banksy, Ayrton Senna and Melbourne’s skateboarding Pappas brothers – the latter subjects of this terrific picture – have had experiences worth relating. But it takes a clear mind and an imaginative sensibility to order those tales into something that looks like a grown-up movie.

So hats off to Chris King. Having worked his magic on Banksy’s Exit Through the Gift Shop and Asif Kapadia’s Senna, the English editor now brings creative ardour to a story of squandered potential and partial redemption. Archive footage complements – and occasionally undermines – contemporary inter- views fuelled with bitter regret. Charging music summons up the period very effectively.

Along the way, sly points are made about the way the US neuters its own subcultures. Eddie Martin, director of a fine film on aboriginal boxer Lionel Rose, is not to be discounted, but these sorts of pictures thrive on effective montage, and King is proving himself a master of the art.

Anyway, there remains a story to be told. Skateboarding enthusiasts will be aware that, in the mid 1990s, Tas and Ben Pappas, two working-class Australians, grabbed the sport’s budding establishment by its throat and squeezed until the eyeballs bulged.

When not honing their skills on the skate-parks of Melbourne, the two kids developed a passion for excess that would eventually fuel their downfall. Happily for the team behind All This Mayhem, this was the era of the Handycam and few escapades seem to have gone unrecorded.

Yes, that really is them leaping from a train into an uninviting river many yards below. Troubled kids from a home where fights were commonplace, they initially sought virtual escape through skating and then, convinced they had the moves, made literal flight for the US.

There was much drug taking, plenty of casual sex and, if the film is to be believed, many other opportunities to use “party” as a verb. Nonetheless, the boys’ ability to improvise street moves on “the vert” (the large half-pipe upon which skateboarding then took place) soon propelled them past the already legendary Tony Hawk to become number one and number two in the world.

All This Mayhem is at its most entertaining when addressing the conflict between Hawk and our heroes. Once again, we are reminded of the way that the US manages to defang, monetise and institutionalise its own initially thrilling subcultures (think of the dread Rock’n’Roll Hall of Fame).

By the time the Pappas brothers arrived, the gritty skateboarding scene chronicled in Stacy Peralta’s Dogtown and Z-Boys had mutated into a thriving industry and the clean-cut Tony Hawk was its unofficial CEO. The best analogy is, perhaps, between punk and stadium rock in the 1970s.

Interviewed at length, Tas Pappas – still intense, but, after a spell in prison, now a born-again Christian – continues to rail at the snobbery and acceptance of conformity. Our sympathies are with Tas and Ben, but it is, even for those unfamiliar with the story, all too easy to conclude who is going to triumph in this conflict.

Hawk (who declined to participate) remains the Grand Poobah of the vert. Hollow eyed and older than his 38 years, Tas now scrapes a living in the minor leagues of this much-changed sport. Ben’s story is sadder still, told compellingly in a film that manages to balance fun with tragedy in almost equal measure.

Is it rad? Is it gnarly? We believe it is.

Kanye West to run for president? Welcome to weirdsville, US
4