‘The Cruelty Men’ review: Love both? They loved neither 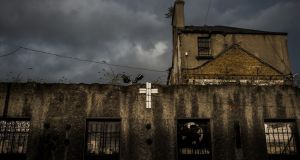 From the publication of her first novel, Breakfast in Babylon, in 1995, it was clear that Emer Martin was an original, radical and vital new voice in Irish writing. Paradoxically, this was because she was charting the experiences of a young, international underclass, the disaffected diaspora, alienated out of Ireland as much by the uncongeniality of prevailing social mores as by any economic necessity.

And, unlike other socially conscious chroniclers of Ireland’s ills at the time, such as Dermot Bolger, she was doing it largely from a woman’s perspective. This global feminist vision has evolved through her subsequent fictions, More Bread or I’ll Appear, from 1999, and Baby Zero, from 2007. With her new book, however, the long-time California resident has come full circle, training her acutely dissecting gaze on her homeland, with an epic family saga of 20th-century Ireland.

The Cruelty Men is the story of the O Conaills, transposed in 1935 from their home village of Cill Rialaig, on Bolus Head in Ballinskelligs, Co Kerry, to found what would become the Meath Gaeltacht, in Ráth Chairn – an initiative by the Land Commission to promote the Irish language.

Although it may border on cliche to depict priests and nuns as sadistic, self-serving ghouls, Martin’s text is a record of a not-too-distant time in Irish life

So, leaving pregnant mother Gráinne behind, to join the rest of the clan later when she has had their latest baby, father Dessie heads off in a pony and trap with their already extensive brood: 10-year-old Mary, hard-working and good-hearted, around whom much of the narrative revolves; eldest boy Seamus, hapless and conniving, the source of so much trouble for the others; Bridget, first to leave the nest, for Dublin and then the United States; sensual, adventurous Maeve, who, after a becoming pregnant while working as a shop girl in Trim, spends the rest of her adult life in, successively, a mother-and-baby home, a lunatic asylum and a Magdalene laundry; feral, creative Padraig, who also winds up the victim of unimaginable horrors in the “big house” in Mullingar; and the youngest, Sean, a smart, sensitive lad whom Mary puts through school and college, and who then becomes a Christian Brother, but grows disillusioned with the endemic abuse until he can no longer live with himself.

Mary vows to her mother to keep the family together, but after her father returns to Kerry in search of his wife, who never arrived, himself never to be heard of again, it proves a task too much for a 15-year-old girl to sustain on her own, and the siblings are scattered, one by one.

In fairness, it is a gargantuan undertaking, trying to dodge the Cruelty Men of the title, who neighbouring farmer Patsey tells Mary “usually are retired guards or teachers and they wear brown shirts . . . They answer to no one and I’ve heard tell that they take bribes from the local industrial school to get more kids in there and put them to work . . . If they got their hands on you in one of them schools you’d be a slave for the rest of your childhood. The priests are always looking for more children.”

Later, priest’s housekeeper and Goldenbridge graduate Elizabeth Quinn expands on this: ‘They’re not fecking orphanages, Mary, because the children aren’t poxy orphans . . . They’re not charities. The government is sending money to them for each child. That’s why the Cruelty Men are scouring the country. They prey on the poor and get more and more children.’

When Seamus gets the small farm, and marries badly, Mary goes into service with the Lyons, a solid middle-class family in Kilbride. This also provides a rich strand of social observation of Ireland in the 1950s and 1960s. Elder daughter Eileen is discouraged from pursuing her dream of becoming a doctor and opts for nursing instead, as she had to run the gauntlet of the boys’ school to study honours maths, much to the disapproval of the nuns, who did not provide the subject in the convent. Younger girl Teresa (“Baby”) is steered towards primary-school-teacher training, as news of a Cambridge scholarship is kept from her.

A school of thought holds that such so-called revisionist readings of recent Irish history are merely kicking an already open door, and with the decline of the power of the church-state nexus serve no useful purpose. Indeed, they are construed as a literary version of talking down the economy. But if we forget we may repeat, and although it may border on cliche to depict priests and nuns as sadistic, self-serving ghouls, Martin’s text stands as a record of a not-too-distant time when, far from loving both, they loved neither.

Besides which, her deft treatment of these thwarted, trammelled, traumatised lives, if often angry, is never heavy-handed or preachy, and should propel an already proven and prodigious talent to the forefront of contemporary Irish letters.