The cobwebs are blown off the English curriculum

A revamped list of texts has been brought in at secondary level. But is it too modern? 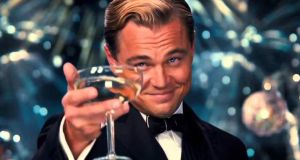 Leonardo DiCaprio in The Great Gatsby film. F Scott Fitzgerald’s novel is an option on the 2017 single text list for Leaving Cert

Harper Lee’s Go Set a Watchman has topped reading lists all over the world this summer. The story of the long-hidden second novel by the bestselling author generated huge hype and nostalgia, not to mention sales of more than a million copies in North America alone in the book’s first week.

For Irish readers of a certain generation, the introduction to Lee’s writing happened at secondary school. To Kill a Mockingbird remains on the recently revamped Junior Cycle programme, but it is now one of many classic and contemporary titles that students get to choose from with their teachers.

A new list of works was selected last year by a development group under the remit of the National Council for Curriculum and Assessment (NCCA). This list will be used by teachers from 2014 to 2019. The selection process was made up of representatives from affiliated education bodies and feedback from teachers and parents.

An interesting mix of old and new, Irish and international authors features on the list. The first-year curriculum includes popular authors such as John Grisham, Neil Gaiman and JRR Tolkien, with Ireland well represented by writers including Roddy Doyle, Eoin Colfer and Anna Carey.

For second and third year, classics such as Lee’s Mockingbird, John Steinbeck’s Of Mice and Men and William Golding’s Lord of the Flies are mixed with more contemporary fiction. Sarah Crossan’s The Weight of Water and John Boyne’s The Dare bring Irish authors with a strong young adult readership into the mix.

The drama options range from golden oldies Shakespeare and O’Casey to modern Irish playwrights Brian Friel and John Breen, and on to popular culture choices such as Willy Russell’s Blood Brothers and Susan Hill’s thriller The Woman in Black.

Film is similarly diverse, with ET, School of Rock, Life Is Beautiful and Bend it Like Beckham making the cut.

“Up until last year the Junior Cert was an open course, which ironically resulted in slightly tired and limited choices, as the same works were being picked,” says Declan O’Neill, manager of the list process at the NCCA. “The new list will be renewed every few years so that students have opportunities to read texts from exciting new authors.”

The revised Junior Cycle also prioritises engagement with writing across literary and non-literary forms. “It means they’re not just reading and writing short stories, but reports, blogs, accounts, biographies,” says O’Neill. “There’s the oral communication, like interviewing and discussion, then drafting, writing, editing. All of these skills are important to their development.”

The new system is intended to give teachers room to experiment with language in the classroom. Barry Kinsella, an English teacher at the High School in Rathgar, uses different forms of expression in his lessons. “From first year onwards, my students plan, write, shoot and edit their own films in groups,” he says. “They generally create films based on either a theme or on their visual and aural interpretation of a poem and then, after several drafts, share their work with their year group.

“The process of creating, learning new skills and allowing themselves to be vulnerable enough to share with their peers is electrifying.”

The more open approach is filtering down to the students. “At the moment I’m studying poetry, short stories, a play and a novel,” says Marc Whelan, a third-year student at Coláiste Raithín in Bray. “I quite like the range of choice we have. We cover lots of genres, so if one type doesn’t sit well, you don’t worry, as we don’t stick on any one for too long. With our novel, we get to pick one out of maybe five or six choices. If you realise the book isn’t for you, you have the option to change it.”

Neasa McCormack, a sixth-year student at Mary Immaculate School in Lisdoonvarna, says she’s been happy with the selection of novels at secondary school: “Currently I’m studying The Great Gatsby. The recent movie version means it was popular with my class before we began.”

McCormack, a spoken-word poet who recently competed for Ireland in a slam in the US, doesn’t have the same affinity for Shakespeare. While she liked the plot of King Lear, she had difficulty understanding the language: “Because no one writes or speaks in Shakespearean any more, trying to take that language and change it into modern English adds unneeded stress.”

Overhaul of the Leaving

The Leaving Cert programme for English has seen a major overhaul in the past decade, with the limited choices of yesteryear giving way to a range that encourages reading for life. “The thing that has worked best is that every year the texts are examined and renewed,” says O’Neill. “It’s not like texts are locked in cement for 20 years as they had been before.”

A reading group convened by the NCCA chooses these texts. It meets annually to discuss and recommend suitable material.

Leaving Cert students must study one novel or play in detail, and three other texts – from a list of fiction, film and drama – for a comparative module. Higher-level students are required to study one Shakespearean drama in addition to 48 poems by eight different poets. At ordinary level, students are expected to study 36 poems.

Emma Woodhouse continues her reign as the Jane Austen heroine of choice, but it’s more democracy than monarchy these days, with contemporary works, such as Donal Ryan’s The Spinning Heart and Maeve Binchy’s Circle of Friends, and modern classics, such as The Great Gatsby, also an option on the 2017 single text list.

For the comparative component, nearly 40 titles, across drama, film and literature, give an extensive choice: Claire Keegan’s Foster, John Green’s The Fault in Our Stars, The Gamal by Ciarán Collins, The Little Stranger by Sarah Waters, the Booker-winning Life of Pi by Yann Martel, Orwell’s 1984, Hitchcock’s Rear Window, A Skull in Connemara by Martin McDonagh and Frank McGuinness’s recent stage adaptation of James Joyce’s short story The Dead all feature.

Some old favourites remain. Hamlet, Othello and O’Casey’s The Plough and the Stars are all on the list, beside novels by Charles Dickens and Emily Brontë.

“The course gives a great and often in-depth view into the magic of what it means to study English,” says Valerie Williams, an English teacher at Coláiste Éanna, in Ballyroan, Dublin. “The comparative [module] is such a rich addition. It stretches students, and the energy in the classroom can be phenomenal.”

While benefiting pupils, the new curriculum places a heavy workload on teachers. “There’s a list of approximately 50 texts that changes yearly,” says Williams. “So while there’s little chance of the material getting stale, an amount of work is required from teachers.”

At university level, have the changes to the curriculum made a difference? Derek Hand, head of English at St Patrick’s College, Drumcondra, says the main difficulty in the transition is making the leap into a world where there are no right answers.

“The exam so dominates the Leaving Cert that it curtails the freedom to explore and express,” he says. “But [the wider list] does offer the building blocks upon which that kind of critical thinking and engagement can be developed.”

With its emphasis on modern fiction and popular culture, not every choice on the current curriculum meets approval.

“The Leaving Cert comparative texts are generally well chosen,” says Kinsella. “But for 2017 they have included the novels The Perks of Being a Wallflower and The Fault in Our Stars. These novels would be popular with my first- and second-year students. I think students should never be underestimated. They generally rise to a challenge.”

Hand warns against reorienting choices too much to the contemporary moment, arguing that students need to be challenged by what they don’t know. “To be opened up to the past, to different cultures, to different narratives, is central to the literary experience,” he says. “Only then do the present and the immediacy of one’s own place become potentially extraordinary.”

What is Houseparty, the app everyone’s talking about – and not in a good way?
5 Miracle warnings and a lack of bull
Real news has value SUBSCRIBE