Speedway grand prix: a race to the outskirts of Europe

It takes courage and skill to be a speedway rider. It’s not easy being a fan either 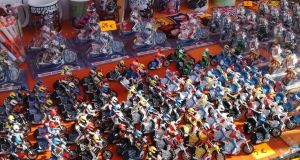 Speedway merchandise is as popular as ever

What would be the most appropriate – truly speedway – memento or Desert Island reminder of a summer spent on public transport travelling to watch the FIM Speedway Grand Prix World Championships? The what? Yes, speedway is still going. Often strongly, particularly in Poland.

These occasionally lusty events mostly get staged in obscure regional towns such as Krsko, Hallstavik, Horsens, Malilla, Gorzow and Teterow. Riders and fans find themselves in these far-flung locations so the grand prix rights holders can harvest the local government financial support payments rather than being chosen for the quality of the facilities or racing. We find ourselves at tracks on the town outskirts or else in faraway woods and forests.

They say at any SGP event you are only ever 50 metres away from another night under canvas. The prime demographic is such that it is almost assumed as a fact of nature that fans own camper vans, caravans or tents as well as, it seems, garden awnings they convert into makeshift shelter to further test their incipient lumbago.

Camping out is such a regular option that you half-suspect the world championships are run as some kind of unofficial shadow Duke of Edinburgh award scheme. Just going wins badges for getting there, while staying locally requires even greater ingenuity and resilience on the part of the average speedway punter. Given the difficulties to surmount in order to attend, the grand prix merchandisers are missing a trick not selling branded tents, emergency rations, crampons, maps, guidebooks or make your own bivouac kits.

Obviously, like any sub-cultural group, speedway fans have their tribes, codifying behaviours and dress codes. This is particularly true domestically in the UK. That said, many aspects of said shale code easily and widely translate across Europe so certain garments continue to be worn across the whole speedway firmament irrespective of location.

Arguably, the anorak is most iconic and remains king (or queen). Ideally these have garish designs, obscure product logos and luminously bright colours so they can be seen from space. Apparently compulsorily manufactured from synthetic materials, they have a strength and toxicity capable of surviving decades of landfill burial or a nuclear holocaust. Recent seasons have seen the peaked cap gain almost similar hegemonic status in speedway culture and the fan wardrobe, especially if worn backwards.

“Official SGP merchandise” tour T-shirts listing the current roster of grand prix locations continue to find favour among those fans keen to boast of their European regional tourism credentials while virtue signalling themselves as an integral part of the cognoscenti when worn back at their home tracks.

Purely from a Welsh nationalism point of view, this is a hard purchase to resist as it features the rather unique but Brexity collector’s item designation of “Cardiff, Great Britain”.

At the instruction of the Fédération Internationale de Motocyclisme this was corrected to “Cardiff, United Kingdom” for 2019 Official SGP Tour T-shirts, despite seven-figures sponsorship of the event by the Welsh government and Visit Wales.

As it is too hard to walk wearing snazzy racing boots or too dangerous to wear the single steel shoe riders race in, flipflops have become the de facto speedway footwear item if fans want to emulate their heroes. Obviously, it is an iron law of speedway flipflops that the further away from the sea or sunshine the pits are, the more they get worn with pride. And in all weathers too. Particularly by those more laid-back and Zen speedway souls found in the pits – usually riders and their middle-aged but still surfer boi beach culture aspirant sponsors or hangers-on dressing age inappropriately.

Given grand prix meetings are never far away from the forest canopy, whenever rain is forecast – for those not in flipflops – the retro steel toe cap quotient suddenly gets pleasingly high.

What are the other essential but collectible accoutrements and artefacts of “global” speedway fandom? Now (thank goodness) the airhorn is in decline – mostly banned or rendered obsolete by environmental concerns – first and foremost, it is the programme. This is the cornerstone upon which all speedway meetings are built. It is often said that if an alien arrived on Earth from another universe at any speedway meeting anywhere, they would quickly assume that the post-race completion of the programme is the key component in our ritual acts of worship and faith.

Such is the power of our obeisance to the speedway programme that – within seconds of any race ending – the majority of fans/worshippers immediately turn their eyes (and hands) downwards to either its completion or focussed study, probably both.

Sadly, like so much nowadays, the grand prix programme has gone supersized and become massively over-priced. So much so that what once was also an ubiquitous Freemason-strength signal of your membership of the speedway tribe – the programme board – is no longer even offered for sale on the official merchandise stalls. Despite the make-do-and-mend nature of speedway culture, even lovingly created homemade boards have almost completely disappeared.

Weirdly, in a further sign of all that is wrong with the creeping corporatisation of everyday life including speedway, items such as grand prix branded lanyards and hard-wearing business card holders are on sale instead.

Sadly, on race day, to contractually protect the exclusivity of the grand prix gear on offer, the normal speedway club shops are not allowed to open so the opportunity to buy rider models and mugs decorated with poor resolution rider photos or sub-heraldic club crests has also gone the way of all flesh.

On the long walk to some grand prix event locations, you can sufficiently escape the relentless uniformity of the product range to find entrepreneurial stallholders still ambitious enough to offer uniquely random, locally significant mementoes. These speedway gifts of a lifetime include “delicious” – allegedly made specially by the bees for speedway fans – Krsko honey or “world famous gingerbread” in unidentifiable rider themed commemorative tins in Torun.

So in a world without speedway half-and-half scarves and scads of branded, increasingly identikit, memorabilia, how is the average grand prix fan to really stand out? Let alone signal their fealty to the world championships or somehow burnish this memory afterwards?

If you are at a meeting in Poland, squadrons of face-painters stand ready to daub you with the name of your favourite rider or in the colours of your national (or Polska) flag. Though powerful visible signs of your commitment, these facial celebrations are only ever temporary and, unlike the memories, soon wash away.

From my summer around obscure speedway tracks in Europe, speedway fans who still aspire to counter-culturally defy The Man and display their individuality default to carefully chosen tatts or intricate body art, albeit often etched by learner tattooists.

Horrifically for speedway traditionalists, the rise of the grand prix has also seen riders adopt so-called brand identity numbers more unimaginative than their nicknames. The creation myths behind how these riders choose their specific race numbers is so pathologically mind-numbingly dull that many fans (even OAP ones) would rather get inked by the work-experience tattooist on their first ever day with a needle than have to learn anything more about the emotional personal maths that underlies them.

If getting a rider rampantly astride their steed carved into your flesh is too old hat or isn’t quite Dungeons and Dragons enough for your body art ambitions then there is a rich ready-drafted vocabulary of speedway bon mots and sayings to consider getting done. These snappy aphorisms, sayings and life-mantras traditionally include “Happiness is 40-38”; “Good Girls Go To Heaven, Bad Girls Go To Speedway” or “Speedway Riders Do It Sideways”.
Hitchhiker’s Guide to the Speedway Grand Prix: One Man’s far-flung Summer Behind the Scenes by Jeff Scott is published by Methanol Press