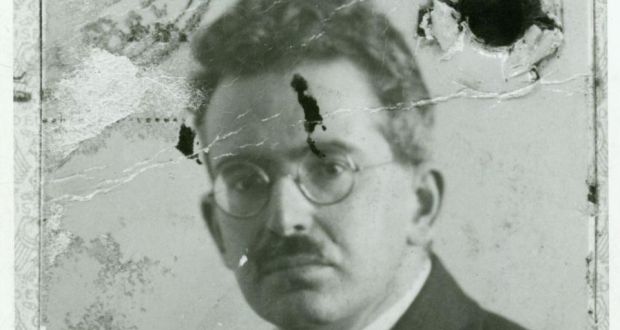 “‘Now have a look around and be sure not to miss the huge metal model of the new Lloyd steamboat, the Bremen. It’s so big, you can see it from afar. The entire thing was made from a mechanical building set. I’m not sure how many of you could rebuild it. To do so you would need the construction kit in size 9, which is the largest and costs 155 marks.”

In this absorbing new collection Lecia Rosenthal has brought together, for the first time in English, a selection of Benjamin’s radio broadcasts. They reveal a playful, mischievous side to his intellect that has become somewhat obscured by the dutiful solemnities of high theory.

Between 1927 and early 1933 Benjamin made more than 80 broadcasts for Radio Berlin and Radio Frankfurt. A large number were for their youth hours, and he wrote two radio plays for children, Much Ado About Kasper and, with Ernest Schoen, The Cold Heart.

The topics he covered ranged from the Berlin guttersnipe to postage-stamp swindles and from true dog stories to a visit to the brassworks. Like the best of children’s writers, he never condescends to his audience, and he communicates his encyclopaedic passion for the teeming immensity of the modern metropolis in vivid, engaging prose.

The forensic tracking of the minutiae of city so apparent in the posthumously published Das Passagen- Werk (The Arcades Project) is everywhere in these broadcasts. Benjamin delights, for example, in the rough-and-tumble vulgarity of Berlin street markets.

His broadcasts routinely quote long passages of spoken or written speech as if he was anxious to make them more of a polyphony than a monologue. The democratic impulse is at play in this inclusion of other voices, other perspectives.

This inclusiveness extends to the groups that Benjamin singles out for discussion in Witch Trials, Robber Bands in Old Germany, The Gypsies and The Bootleggers. His sympathies tend almost invariably towards the marginalised and the maligned. He takes the standard villains of the children’s tale – the witch, the Gypsy, the robber – and shows that they were men and women who were often the victims of cruel prejudice.

The Fall of Herculaneum and Pompeii, The Lisbon Earthquake, Theatre Fire in Canton, The Railway Disaster at the Firth of Tay and The Mississippi Flood of 1927 detail a series of calamities.

But Benjamin rejects the voyeurism of distress in favour of seeing each of these as an unwanted illumination of deeper societal faults. In his piece on the Mississippi floods, which uncannily anticipates the events around Hurricane Katrina, in 2005, Benjamin charts the acute social and racial tensions in the New Orleans hinterland and the brutal use of state force in dealing with the problems posed by extensive flooding. His interest lies primarily in what is unnatural about natural catastrophes, namely the actions of privileged groups in making a bad situation demonstrably worse.

In his The Work of Art in the Age of Mechanical Reproduction he was acutely sensitive to the message of the medium. Photography or cinema or radio did not simply convey content in different ways. They created different ways of seeing or hearing.

Coal Peter, a character from a German fairy tale by Wilhelm Hauff, tells Mr Announcer in Benjamin and Schoen’s radio play The Cold Heart that he wants to visit Voice Land. He tells the puzzled announcer that in Hauff’s fairy tale he could speak to only one child at a time but that “now it is supposedly the fashion for fairy tale characters to step out of books and cross over into Voice Land where they can introduce themselves to many thousands of children at once”.

A particular striking example of Benjamin’s inventiveness is his script for a radio play on Georg Christoph Lichtenberg, a 19th-century German writer well known for incisive epigrams. From their extraterrestrial dwelling, a collection of Moon Beings known as Labu, Quikko, Sofanti and Peka inquire into the life and times of Lichtenberg using a Spectrophone (where everything on Earth can be heard and seen), a Parlomium (allowing human speech to be translated into music) and an Oneiroscope (“with which the dreams of Earthlings can be observed”).

In a carefully choreographed organisation of radio’s possibilities, Benjamin conjures up the troubled life of the German aphorist. Sofanti expresses dismay at the profligacy of Lichtenberg’s interests. “Are these subjects worthy of a scholar? Observations about the preparation of ice cream in India and about English fashions, about first names and about samples of strange appetites, about the use of flogging by diverse peoples.”

If Sofanti had trained his Spectrophone on the author of his own lines he would, no doubt, have been similarly perplexed. Nothing escaped Benjamin’s generous, capacious and penetrating gaze. No subject was beneath the dignity of comment. Lichtenberg: A Cross Section was never broadcast. By February 1933 all hope of future work for radio had disappeared. The Nazis were determined that the only voices to be heard in Voice Land were their own.

Radio Benjamin will ensure that Benjamin’s voice will be heard by a new generation of readers. It is a voice that is compelling, subversive and, above all, splendidly alive. Michael Cronin teaches in the school of applied language and intercultural studies at Dublin City University. His most recent works are The Expanding World: Towards a Politics of Microspection and Translation in the Digital Age