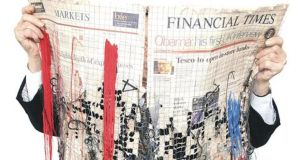 Well produced, good to hold and look at, Poetry Bus is a poetry magazine at heart, its flash fiction definitely at the prose poetry end of the spectrum. Even the essays on My Writing Life have a lyricism and elliptic quality

Blogger Peadar O’Donoghue has come a long way since he “happened on an experimental idea that we (a group of like-minded bloggers) should sit down at the same time across the world on a given date and time and write a poem to see if there were any similarities in the writing, anything in the zeitgeist as it were”.

Out of this idea, a magazine was born. Five years on with a lot of hard work from Peadar and his wife, Collette, The Poetry Bus has made a name for itself, attracting a slew of international poets and artists, sponsorship by The Munster Literature Centre and serious crowdfunding success. This is a comprehensive magazine that publishes art, poetry, flash fiction, reviews and includes a CD with recordings of poems, flash fiction as well as the unexpected delight of music from Stephen Jones’s Babybird.

Writing about money is like writing about sex: it has to be about something else as well. The best poems here do that “something else” over and over again. Well produced, good to hold and look at, Poetry Bus is a poetry magazine at heart, its flash fiction definitely at the prose poetry end of the spectrum. Even the essays on My Writing Life have a lyricism and elliptic quality. Crona Gallagher’s Musing on Rejections intensively delves into the eating of an orange, squeezing the juice out of her metaphor. Can it be worth it when “To eat an orange in Ireland is to take a chance, gamble.”? There is an enormous variety here, experimental poetry, dramatic monologues and plenty helpings of the demotic which is only to be expected on the egalitarian bus.

With almost a hundred poems alone in this tightly packed issue, it is impossible to cover all of them. The shorter poems shine very bright. Keith Payne’s tight painful short poems balance the vernacular with a serious poetic lyric and sharp images, “like you I tramped the sites –/throttled barrow thighs for an army of brickmen/ whose thumbprints had worn off”.

These are the poems that linger on the mind. Sean Smith’s concentrated Factory Town juxtaposed “tight hipped houses/ like those soldiers from a Napoleonic war, factory whistles, sparks from clogs lighting the flints/ of a thousand muskets”, More than sum of its parts, its dance through history is fresh and new.

Some, like Liam Duffy’s Emigration Haiku, seemed to tap into such a familiar voice and rhythm, I was sure that I must have heard it before:

I’m emigrating, tape
the Angelus
and send news of who gets cancer.

San Bernardino’s Cindy Rinne has three fine short poems, including one of two excellent tiara poems in PB$, (the other poem is by Heather M Browne). Her Ghost Money is a dark and lyrical evocation of time and place, “Phong used to fit/ sitting in a bucket for a bath. One time he slipped…” Bethany Pope’s highly visual The Money Dance tackles money brilliantly with super-concrete images illustrating its theme – the custom of pinning money to a bride’s dress. It could be a Greek wedding or eastern European or Cuban but its American setting gives it that immigrant charge. “Men paid five dollars each/ to take their turn with you/ pinning the bills to your dress/ …Leafing you in Lincoln-headed foliage/…stained with verdant growth.”

Money and family make for some hard-hitting poems like Julian Gough’s Gold: “King Midas touches your beautiful children/ still in their seatbelts/ as soon as the car’s out of sight.” Maria Isakova Bennett’s Short and Sour is another short poem punching well above its weight, “Mum was shouting hit me then/ and I wasn’t going to sleep.”

Short and Sour is followed by Another Brick, an excerpt from New Shoes, a graphic novel by Rae Joyce. This is another child’s point of view, the poignancy enhanced by the understated drawings and taut dialogue. Currently based in Auckland, Rae Joyce grew up in northern England and the story is set during the miners’ strike in 1985. The politics is subtle, so much easier through the child’s eye and ear. The protagonist, whose father is on strike, experiences the humiliation of having to wear free shoes which had heels that “were squishy and didn’t make clip-clop” sounds. Money and shoes are inextricably linked and so Another Brick is followed in its turn by Paul Dillon’s New Shoes. Dead children are “fished out of the Med”. The children wore new shoes because “the eyes that see you all/ In new things/ Will think/ They look smart/ Not at all like refugees/ Nuisance Asylum Seekers/ Leeches.”

Refugees recur in Antain Mac Lochlainn’s flash fiction, dipping into the voices of asylum seekers forced by their guides to sleep in trenches in the freezing desert night of Algeria where they perish, “How quickly, how completely, we were erased” while Alan McMonagle tackles the darkness closer to home in his dystopian report which gallops along in hilarious headlong style with lines like “There was a bomb scare in Everything for Two Euros” and “Every Bingo hall in Salt Hill has been converted into a gas chamber”.

The CD is a definite bonus. Hearing the poems makes a difference, especially when they are read and produced so well. I particularly liked Clodagh O’Brien’s Galaxy, the innocent timbre of her reading voice made the subject matter – paying for sex – so much darker. Dale Houstman’s reading of his poem RSVP opened up its subtleties to the ear, the musicality of Maria Isatova Bennett’s After was heightened. Another interesting poet featured on the CD is Korliss Sewer from Washington. The Paper City, deals some in some zany off-beat lines, “where only folks with the right head shapes for drinking are allowed to enter the bars”.

Poetry Bus signs off with a subtle poem from Armel Dagorn, “In winter we move/ things around some/ keep ourselves close/ to walls for fear” complemented by the moody blue Brooklyn Queue from artist Brett Amory, which sums up winter in all its bittersweetness “…our Dickensian suffering/ before remembering ourselves,/ our time, and bank accounts,/ and turning on the heating” .

Martina Evans is a poet and author. Burnfort, Las Vegas (Anvil Press, 2014) was shortlisted for The Irish Times Poetry Now Award 2015. Mountainy Men, a new narrative poem, is the recipient of a Grants for the Arts Award in 2015. Watch, a pamphlet, will be published by Rack Press in 2016 and her Selected Poems will be published by Carcanet in 2017