Read the winning poem, judge Daljit Nagra’s comments and the story behind ‘A Gun in the House’ 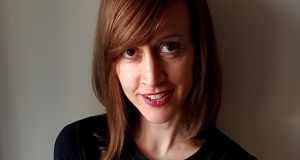 Natalya Anderson: I began writing poetry as an antidote to being told my memories were not real

The winner of The Moth Poetry Prize was announced at an event at Poetry Ireland in Dublin last night. The winning poem, A Gun in the House by Natalya Anderson was chosen from a shortlist of four poems by the judge Daljit Nagra.

A Gun in the House
By Natalya Anderson

Our daughter’s nose won’t stop bleeding, Father.
Come in. Welcome. Sit at the head of our table.
Would you do us the honour of blessing this
meal, Father? Upstairs, in the highest chamber
she won’t eat. Her nostrils are raw,
crusted. Bread, Father, break it
with us. She tells us she’s too hot, says
it’s as though she is trapped
inside her own mouth. Her throat burns
like gunpowder. Help yourself
to beef, potatoes, veg, Father.
At night she gnarls into floorboards, her fingers
rooting for something she calls cool peace.
We hear her hissing. She says her moons are heavy.
Please enjoy an extra helping, Father. Around her waist,
she digs her nails until the wounds scab, complains
she cannot remove the scent of gawking. Custard
now, Father. Cake. Repossess her,
Father, protect us. We are terrorized
by her fear. Her hips are creaking, she whimpers,
cocks her head like a confused coyote.
The backs of her legs are splintered. Cream,
Father, please take more. Our daughter’s blood
is everywhere, her refusal to pray
a metallic pox on our family. Before dawn she fires
off her walls, feet, fists blasting up a chalky outline.
Bring your cognac, Father, go up to her, you
remember where we keep her locked.

Nagra said: “Almost a darkly comic scenario at first reading because of the child’s illness vying with the exaggerated hospitality towards the priest. The confidence of the speaker, and the subtlety of the writer invite a rereading of the poem for what lurks beneath the surface. On my second reading of the poem, I didn’t find a trace of humour, or tonal imbalance, but the unfolding of a bleak tragedy. Every line took on a dark nuance. The trope of the girl in the attic leads us to wonder why she’s in such a grievous state, but the clues are there in the speaker’s unknowing words. While the priest engorges on his feast, with extra cream, we learn that the girl has renounced prayer. A succession of sensually unsettling images drive this nervous, ironic poem forward. We learn that the girl ‘cocks her head like a confused coyote’, that ‘Her throat/ burns like gunpowder.’ It seems that the person charged with saving her may have been the source of her undoing.’

Anderson is a writer and former ballet dancer from Toronto. She won the 2014 Bridport Prize for her poem Clear Recent History and the same poem was highly commended at the 2015 Forward Prizes. This is the second time Natalya has been shortlisted for The Moth Poetry Prize (Billy Collins shortlisted a poem of hers in 2015). She has a master’s degree in creative writing from Anglia Ruskin University in Cambridge and is the founder and curator of The Poetry Extension. She is married to a very tall Irish man and they have a six-year-old son.

Natalya Anderson on winning the €10,000 Moth Poetry Prize
I began writing poetry as an antidote to being told my memories were not real. This poem, A Gun in the House, is a manifestation of that practice.

I was raised by a single mother, which was not uncommon in the working-class neighbourhood I grew up in. What was different about our situation was that my mother was a priest. It was still new for women to become priests when my mother was ordained. I was very small at that time.

While I was proud of what my mother accomplished on her own, and while I still have deep respect for her achievements, my perspective and experiences from that time are marred by loneliness and trauma. When I told the people responsible for looking after me about my most traumatic experiences, I was trained to pretend they never happened. I existed that way for the first 10 years of my life.

In that decade I looked for a way to silently express my darkest anxieties. For many years, training as a professional ballet dancer worked well. I was able to dilute my worries without having to risk speaking about them again. The repetition of athletic training – choreography, music, the stage and performance – offered a kind of filter for the threat of my memories. When I injured my knee one too many times – eventually beyond repair – this means of artistic expression was no longer an option.

As I searched for another lyrical form of catharsis, and as I moved my way through an undergraduate and master’s degree, creative writing and poetry became a natural, almost musical, way to fill some of the void ballet had left in my life. In this capacity, I began to write poems that represented my worst fears. I wrote A Gun in the House in one of those moments.

Over the years, I have accumulated many reasons for writing poetry – to document life’s anxieties; to strip away censorship; to negotiate the cruel power of the privileged over the underprivileged. In seeking to write my way out of such a precarious world, this prize from The Moth has an impact on my life I cannot describe efficiently.

Firstly it is a great honour to represent poetry with Audrey Molloy, Cheryl Moskowitz and Teresa Ott, my three fine, talented fellow finalists. Their poems are powerful examples of what female writers are producing today.

Secondly, it’s overwhelming to be part of a publication and a competition manged and curated by Rebecca O’Connor. Rebecca not only devotes much of her life to poetry and creative writing, but she is also a quiet, far-too-modest poet and writer in her own right. Rebecca is a woman I admire and am happy to be in communication with through this life-changing experience.

Thirdly, financially, it’s impossible to express how difficult it is – for virtually all poets – to make any money whatsoever. Our work, much like ballet or any visual or fine art, is often considered fluffy and transient. Many of us who write poetry for “a living” do so as a way to navigate childhood trauma or anxiety, and this rarely stems from a foundation of financial strength. Like most of my poet colleagues, I have mostly known financial struggle and distress. Being able to attend professional ballet school and eventually university at a postgraduate and then graduate level involved a lot of rejected applications for government funding, an endless barrage of jobs that I wouldn’t wish on my worst enemy, and – ultimately – a spectrum of debt that this award will just barely allow me and my family to emerge from. I consider this to be a huge privilege, and a great gift, when I think of how it will help me, my husband and our young son. I will never take this for granted.

Finally, and – for me – most importantly, winning this prize offers me some confirmation that my life’s experience might have been real. The comments from this year’s judge, the incomparable Daljit Nagra, are the first public declarations by a complete stranger, by an objective party, that my memories are not only based in something concrete, something that has weight, but also that they cannot be rewritten by someone else.

I would encourage any writer who is considering entering The Moth’s various writing competitions to summon the strength to go for it. No matter the outcome, getting those deeply personal words out of the mind and into the universe is a courageous act, and just knowing that someone will read and acknowledge those words may release you in ways you could never have imagined.