Mountains to Sea DLR Book Festival: Our pick of the best 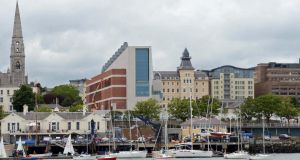 Dún Laoghaire and its new library will be hosting this weekend’s Mountains to Sea DLR Book Festival. Photograph: Eric Luke

The Mountains to Sea DLR Book Festival set the tone for the four-day event at its launch on August 27th, with controversial British novelist Martin Amis. He gave an insightful, engaging, humorous talk, one that promises to be the first of many as part of the festival.

The festival, now in its sixth year, had curtailed its run, and now goes from Thursday to Sunday. This year it also forms part of the opening programme of the new Central Library and Cultural Centre. The more compact schedule hasn’t affected the quality of the events, with a nice blend of national and international guests ranging from bright, young things to more established heavyweights.

It’s an eclectic programme, one that proves why the festival has become such a mainstay on the Dublin literary scene so quickly. Here’s our pick of the best.

This one-man show, written by and starring Eamon Morrissey, has already had a sell-out run at the Abbey Theatre. It’s worth catching this celebration of Maeve Brennan’s writing. Morrissey and Brennan grew up in the same house a generation apart, and although they met just once, he weaves her memories of the house and his together. Sinéad Gleeson will interview him after the performance.

Man Booker Prize long-listed David Mitchell’s wit and charm are what really makes his novels so brilliant. Watch it come alive in front of you as he speaks to John Boyne, who brought us The Boy in the Striped Pyjamas. Both will be reading from their new novels; Mitchell from The Bone Clocks, a metaphysical thriller, and Boyne from A History of Loneliness, his first novel written based in Ireland.

Celebrity interviewer extraordinaire Lynn Barber’s sixth book, A Curious Career, chronicles her work as a journalist. With a reputation for asking the tough questions, the book is filled with interview tips and celebrity anecdotes from behind the scenes. At 70, she’s not about to soften up now. The interviewer turns interviewee on Saturday, when Sinéad Gleeson will be asking the questions.

Nominations for Granta’s Best of Young Novelists 2013 prize may be the only accolade Kamila Shamsie and Xiaolu Guo have in common, but it only marks the start of the list of awards the two have been up for. Hailing from Pakistan and China respectively, both consider themes around politics and love across the globe in their latest novels. The two will be discussed on Saturday when Shamsie will read from A God in Every Stone and Guo from I Am China.

It’s two Children’s Laureates for the price of one in the new DLR LexIcon on Sunday. Eoin Colfer, who needs no introduction as the author of Artemis Fowl, joins Welsh multi-lingual rapper and poet Aneirin Karadog, for what promises to be quite an exciting and energetic chat with Tom Donegan of the Oxford Story Museum. One to bring your kids along to.

Northern Ireland’s literary talent is represented well at the festival by David Park and Sinead Morrissey. Although Park writes fiction, and Morrissey, as Belfast’s first ever Poet Laureate, a poetry collection, the two have considered parallel themes in their latest works, The Poets’ Wives and Parallax. They have particularly focused on Russia, so there’ll be plenty of interesting discussion on Sunday afternoon.

This year’s winner will be announced on Saturday from a shortlist featuring Tara Bergin, Nick Laird, Sinéad Morrissey, Conor O’Callaghan and Billy Ramsell.

Although also an author, Yasmeen Ismail brings something a little different to the festival, in the form of an illustration masterclass. Ismail ran a successful animation company before turning her eye to illustration, but her background is obvious in the energy she brings to her mostly watercolour illustrations. She’ll be joined by illustrator Steve Simpson.

As one of the world’s leading thriller writers, British-born Lee Child has made quite the impression. His latest novel, Personal, continues Jack Reacher’s story, which began in 1997 in Child’s first novel, Killing Floor. You can look forward to hearing him discuss his trademark curiosity and attention to detail that make his novels so addictive, with Declan Hughes on Sunday.