Every Christmas the children’s books come down from the attic

The book bag, like our eldest, is turning 18 this December 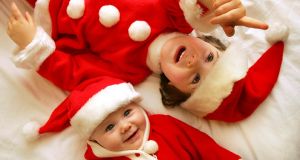 When our daughters were younger, two December traditions heralded that Christmas was imminent: they were photographed by their dad – Santa hats essential – and a bag of books was extracted from the attic.

The annual photograph, used on our Christmas card, was phased out long ago. The only posing now is for selfies and snapchat. The books, however, are still with us.

The book bag, like our eldest, is turning 18. Evie, born on the night of December 23rd, came home on the 24th, wrapped in a snowman-adorned blanket, bought by her smitten father.

Christmas Eve was a blur of visitors that melded overnight into hormonal tears. An early departure was required from my parents’ house – our turkey dinner on two cling-wrapped plates. I blubbered about forgetting to put a present under the tree for our new baby. I had fallen at motherhood’s first hurdle.

Others, however, had remembered. And among her first gifts were books: Kipper’s Christmas Eve, a festive story about Mick Inkpen’s dog and friends; and Postman Pat and the Christmas Baby, the tale of another yuletide arrival.

Both still retain their price stickers, euro and punts, in preparation for the currency changeover: Kipper remains remarkably pristine, despite countless page turns to get to the surprise at the end – a tiny red light on a reindeer hat, whichstill flickers.

The books travelled from Dublin to Killarney for Christmases with Nan. In between stories we listened out for sleigh bells, and one year a flurry of overnight snow, and a half crunched carrot provided ingredients for a story of our own.

Despite an obsession with the song Walking in the Air, Raymond Brigg’s The Snowman was mostly ignored. Far more exciting was a personalised book about Evie’s flying visit to the elves’ workshop. She retold the story for years as if it was true: “I presumed because it was written down in a book that it had actually happened.”

Neasa arrived in 2005, and that December she was propped into a corner of the couch so big sister could sit alongside, to point out pictures, and recite her version of each story.

By now the bag contained Dr Seuss’s How the Grinch Stole Christmas, but we always lingered longer on pages featuring the Whos and Cindy Lou, rather than the red-eyed grump.

There was also a beautiful pop-up version of Clement Clarke Moore’s poem, The Night Before Christmas, saved for the last story on Christmas Eve.

“He had a broad face

and a little round belly.

That shook when he laughed

Though only read aloud once a year, this book was opened so often that the constant “twist of his head” has all but decapitated Saint Nick.

Some of the Christmas books made up the scant 23KG baggage allowance for the year we spent in Australia. And Crisis on Christmas Eve joined us on the return flight home. This comic story book recounts how four koalas help to get the gifts delivered when Santa’s sleigh crashes in the outback – and the best present he brings is the rain.

Bedtime – and daytime – stories became Christmas themed from early December, though we were sometimes inveigled into a late November outing of Angel Mae, a nativity play story from their beloved Shirley Hughes collection.

Evie’s first choices were usually Kipper, or the charming Merry Christmas Blue Kangaroo (because she looked like Blue’s owner Lily). Neasa literally wore out The Christmas Bear, a pop-up book with pull-out tabs and hidden surprises.

Both loved Angelina’s Christmas, from their collection about ballerina Angelina Mousling, and the one we tried to hide each year, Harvey Slumfenburger’s Christmas Present, a long and repetitive account of Santa’s journey to deliver a forgotten present without his exhausted reindeer. It was tough reading material for tired parents.

The bag’s contents have diminished. “We’re missing the one about the mouse that goes out to find the star for the tree,” Neasa reported last week. Others were given away, including The Snowman and The Little Match Girl, Hans Christian Andersen’s poignant story that unfortunately once again seems closer to fact than fiction. As small children they found it unbearably sad; the thought that another child might not have a home, food and warmth, and the guarantee that Santa would find them.

The remaining books come down every December, but usually remain untouched by the tree. This year, however, a few have been tucked into bags by the girls, to take babysitting and share with new readers.

I can’t recall the moment when we stopped reading together. Like playground visits, enthusiasm waned over time, in favour of other items on a to-do list, or the next episode on the boxset. But the ending of that nightly ritual leaves a void that can never be filled by communal TV viewing.

Perhaps it’s time to revive an old tradition. But it’s now their turn to read ... and for us to demand Harvey Slumfenburger.