Desmond FitzGerald on TS Eliot: a revolutionary taste in poetry 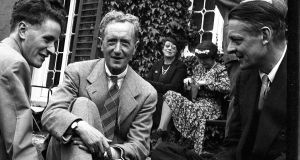 At the height of the Black and Tan outrages, a correspondent described Sinn Féin’s director of propaganda as “a curious figure in the bloody mêlée of Irish politics… one always felt that he would have been more at home in London, preferably at the Café Royal, discussing the latest dictates of fashion in vers libre or Paulo-Post-Futurism”.

Eoin O’Duffy, the Free State’s first chief of police and future leader of the Blueshirts, gave a more blunt assessment: FitzGerald thought that “there was a lot of the ‘mob’ about the people of Ireland”.

A poet of the literary avant-garde, as a young man of not yet 30 FitzGerald was thrust into a leading role among what his friend and fellow Cumann na nGaedheal politician Kevin O’Higgins described as “the most conservative-minded revolutionaries that ever put through a successful revolution”. Remarkably, in the midst of that revolution, he appears to have “discovered” TS Eliot, a central figure in modernist poetry, for an Irish readership.

Born in West Ham in 1888, FitzGerald was a conspicuously literary child. According to family legend, he walked six or seven miles from his home to catch a glimpse of WB Yeats swanning into the Café Royal. In 1909, FitzGerald introduced Ezra Pound to the group of poets later known as the Imagists, including TE Hulme, FS Flint, and HD (Helen Carr and Jennifer FitzGerald both have uncovered much of significance about this period.)

The group met on Thursday evenings in the Tour Eiffel restaurant on Percy Street, where Pound declaimed his Sestina: Altaforte with such vehemence that the cutlery and decanters vibrated. The proprietor Rudolph Stulik, self-styled product of a dalliance between a Viennese aristocrat and a ballerina, put a screen around the motley band of poets to placate his other diners.

The cheap continental fare attracted a Bohemian clientele, with Vorticist murals of the Eiffel Tower painted by Wyndham Lewis giving the atmosphere an added verve. Minnie, Stulik’s pet pig, bumbled freely around the restaurant; her eventual death was bitterly mourned by the patrons, including the artist Iris Tree, who ate a slice of Minnie all the same.

The Thursday meetings of the Tour Eiffel group in Edwardian London gave birth to poetic modernism. Iambic pentameter was given the famous “heave” that Pound alludes to in The Cantos in favour of free verse and avant-garde experimentation.

Poetry was not the only area in which the Tour Eiffel group were innovators: FS Flint was a socialist contemptuous of “shilly shally” reformism, Florence Farr a feminist “New Woman”, and TE Hulme a die-hard Tory with the firm conviction that the Conservative party had capitulated to the cloying sentimentality of liberalism. FitzGerald’s advanced Irish nationalism – urged on by his much more radical future wife – introduced another element to these poetic revolutionaries.

FitzGerald met Mabel Washington McConnell in the central branch of the London Gaelic League in 1910. The daughter of a prominent Belfast Presbyterian distillery director, McConnell left Queen’s College Belfast a republican, suffragette and socialist but, as Garret FitzGerald stressed, mainly a republican.

She moved to London in 1908, completing a teaching diploma, and was briefly a teacher before taking up work as a secretary for George Bernard Shaw. Mabel attended lectures on Sinn Féin, while FitzGerald dabbled in the occult meetings of The Order of the Golden Dawn. They had barnstorming arguments about Irish politics with Hulme, with Desmond acting as peacemaker.

Their political differences would erupt in the chaos of the Civil War, with Mabel fiercely opposed to the Treaty her husband’s government implemented. Mealtimes in the family home were punctuated with the mocking jibes that Pierce, the second eldest boy, directed at his father: “Pass the salt, traitor”.

In 1911, Mabel was summoned home to Co Down, where she discovered that she was pregnant. She escaped out of a window and returned to London where the couple married. Their shotgun wedding was later satirised in an ink sketch by Jack Yeats, with attendants bearing clubs and other weapons of enforcement, captioned “The full house of Irish love / was Mabel FitzGerald”.

They eloped to Saint-Jean-du-Doigt, a haven for artists in northern Brittany, and then, sensing that “there was going to be a great movement in Ireland, or that it was necessary that some movement should be launched”, on to Kerry, where FitzGerald organised a branch of the Irish Volunteers, and put on Abbey staples in Irish with Ernest Blythe.

On Easter Monday 1916, he was sent by the O’Rahilly to Eoin MacNeill to inform him that the Rising was going ahead. Desmond and Mabel arrived at the General Post Office to hear Patrick Pearse read the Proclamation of the Republic.

According to his memoirs (posthumously published with the title Desmond’s Rising), FitzGerald told his wife, “this is worth being wiped out for”. He was put in charge of the canteen and proved extremely strict with rations, holding out for a long siege, a fact that made him unpopular with his fellow rebels. In the aftermath of the Rising, he was arrested hiding out in the attic of the family home, sentenced to 20 years’ penal servitude, with 10 years remitted.

Released in the general amnesty of June 1917, FitzGerald resumed his political activities, becoming involved with the nationalist review Ar n-Éire/New Ireland. Edited by PJ Little, it had been launched in 1915 as a literary and political weekly standing “on the threshold of a new era in Ireland”.

Frank Gallagher, who would later have a testy relationship with FitzGerald in Sinn Féin’s propaganda department, described New Ireland’s “big office up the narrow stairs on the first floor” on Dublin’s Fleet Street, where all “the writers and artists who stood beside Sinn Féin” gathered: Fred Higgins shyly reading a poem, Pádraic Ó Conaire with his pipe and a short story in Irish.

New Ireland was perhaps surprisingly receptive to developments in modernism, publishing JM Hone on French intellectual thought, and the celebrated translator of Plotinus Stephen MacKenna’s plea for Gaelic verse to embrace poetic freedom and metres “perhaps from Japan or Hungary”. Lennox Robinson gave a cranky review of Ezra Pound’s Lustra, finding those poems that were “in the vague imagist style” most pleasing, but yanking Pound’s “defective ear” for his vain attempts “to do what only music can do”.

FitzGerald contributed poems and literary criticism, including what appears to be the first note on TS Eliot’s poetry to appear in Ireland: an enthusiastic May 1918 review of The Love Song of J Alfred Prufrock, which had first appeared in Harriet Monroe’s Poetry in June 1915 as a result of the interventions of Ezra Pound. The review lends a fascinating insight into the connections between the “Irish revolution” and the poetic revolution of literary modernism:

“Mr. T.S. Eliot is ultra-modern and revolutionary… He aims at directness, clarity and definition. He makes his own rhythms. He throws away the old analogies and presents new images drawn from the life of modern cities and with it all he still makes use of rhyme… He believes in the artistic value of modern life and of everything in it, and he exercises the absolute freedom of his subject.”

An Easter rebel surveys a canonical statement of poetic modernism, and translates it into the language of revolutionary politics: forging one’s own rhythms, out with the old and in with the new, vistas of “absolute freedom”.

It is a remarkable document, Eliot’s poetic tour de force finding hospitality in a Sinn Féin journal where it did not in the Times Literary Supplement and other newspapers of record.

The morning of its publication, FitzGerald and 73 other leading Sinn Féiners were arrested on trumped-up charges in the “German plot”. The review suggests that literary modernism provided him with an alternate language to make sense of his politics: as he noted in his memoirs, “people always think that influence must be direct and visible. Whereas in the realm of ideas it is more frequently indirect and occult.”

There is only one criticism of Eliot’s poem: FitzGerald regrets that Eliot “seems to have measured out his verse with table spoons”.

Eliot would become friendly with the FitzGeralds, visiting their family home, Fairy Hill, in Bray in the 1930s; but that was much later, when both men had long since renounced their youthful rebellions for austere conservatism, and the reception of Eliot in Ireland would be associated with another up-and-coming poet: Thomas MacGreevy, whose book-length appraisal of Eliot was published in 1931. But in 1918, as Desmond began another long prison sentence, his review’s palpable gambit is that it takes a revolutionary to know one.
Karl O’Hanlon is a lecturer in modern and contemporary poetry at Maynooth University. His is working on his first book, Official Voices: Poets and the Irish State.