Seaside tales full of magic and mystery, and a bear looking for chocolate cake 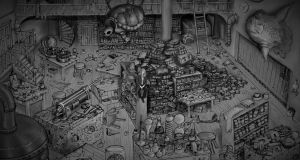 Struan Murray’s debut novel Orphans of the Tide is a seaside story with a dark and magical twist.

“Child, child, lighthouse child, Are you as strong as the sea is wild….” This is the song that Lampie, the lighthouse keeper’s daughter, uses to comfort herself as she heads across the headland in a violent storm to buy matches. She shouldn’t really be charged with the responsibility, but when a ship is wrecked on the rocks it is Lampie who takes the blame. Banished to “the Black House, the monster’s home, Where the beast does live and roam”, Lampie’s future looks bleak. However, appearances can be deceptive as Lampie learns, when she finds magic (and mermaids) beneath the monstrous surface of the creature trapped in the Black House’s tower. Lampie (Pushkin Children’s Press, £7.99, 10+) takes its name from Annet Schaap’s resourceful, if forgetful, heroine. Schaap, an illustrator making her writing debut, creates the mystical island world with vivid visual detail. A scattering of evocative pencil sketches also set the scene for the unfolding six-part adventure, which recalls classic Andersen fairytales, in particular The Little Mermaid. Richly atmospheric and always surprising, Lampie is a book to get lost in.

Struan Murray’s debut novel Orphans of the Tide (Penguin, £7.99, 10+) is another seaside story with a dark and magical twist. The setting is The City, the last city in the world in fact, whose fate is determined by the erratic tides. When a finback washes into The City with the turning highwater, a boy is discovered in the belly of the whale. The citizens believe that he is the Enemy, a human vessel for the God who has drowned their world, and that Seth must be sacrificed for their survival. However, fearless inventor Ellie, a logical mind among the superstitious, believes otherwise and sets about saving him from the puritan forces of the Inquisition. There is a touch of Phillip Pullman about the world that Murray creates, and Murray matches Pullman lyrical prose in his descriptions of The City’s sea-soaked skylines and the tools that Ellie wields as she attempts to set The City’s imbalances to right. The comparison, however, should not take away from Murray’s originality. With its “mountainous grey roosts of ancient buildings” and its sometime subterraneity, The City is singular in its character, while the characters themselves, led by the plucky Ellie, anchor Orphans of the Tide in an urgent, human reality.

April is not an orphan, even if she lives in an orphanage of sorts; her mother, she is certain, is coming to reclaim her any day. April has lived in a lot of houses, in the care of countless cold foster parents, but she has never really felt at home. Her new lodgings at Winterborne House may just be the place where she can forget about her mum and forge a new family, but April is not quite sure if the house head Ms Nelson, aka the Woman in White, is “her fairy godmother or her evil stepmother”. Ally Carter’s Winterborne Home for Vengeance and Valour (Orchard, £6.99, 10+) is a pacy mystery with a sly humour and a spunky protagonist slow to trust her peers. April’s independence, however, makes life even more complicated than it already is. It is when she learns to trust the reclusive missing Winterborne heir and the other strays at the foster home that April draws closer to solving her own personal drama and to realising that “family isn’t always something we’re born into”.

The Case of the Missing Cake by Eoin McLaughlin (Walker, £12.99, 3+) features an ursine detective determined to get to the bottom of “the most terrible crime. The world’s most delicious, tongue-jinglingly, chocolaty cake has been...STOLEN.” Bear follows a trail of sprinkles and crumbs through the alphabet searching for the culprit. Could it be Mr Fox, who has a history of stealing sweet treats? Or the Gingerbread Man, Fox’s onetime victim? Or Octopus, who has eight arms to help himself with? Or Pig, who has already been banished by the Queen? As Bear settles down for some zzzzs after “solving” the mystery, a new perpetrator suddenly emerges and readers will have to retrace their steps, examining Marc Boutavant’s bold detailed illustrations for clues. McLaughlin’s book proclaims itself to be “not an alphabet book”, but it is of course a sneaky, witty way of reinforcing early literacy skills.

There is another animal detective in Supermouse and the Big Cheese Robbery (Little Tiger, £12.99, 3+) by M N Tahl. The picturebook opens on “a monumental day in Mouseopolis...the grand unveiling of the Big Cheese: the most magnificent morsel the city had ever seen”. Unfortunately, the stinky specimen has disappeared. It is up to Peter Parmesan, aka Supermouse, to save the day. Tahl’s text is joyously superlative and demands to be read aloud with the serious, overblown tone of a noir-voiceover. Mark Chamber’s illustrations provide extra layers of humour and lots of fiddly peep-through distractions: fold-out newspapers filled with puns and playful imagery that draws on the visual lexicon of superhero legends. As the ravenous rodentine rogues are placed safely behind bars Mouseopolis is safe at last, but there are plenty more cheesy jokes to be exploited and Supermouse surely has more adventures to come.

Hannah Gadsby: Douglas – Even her detractors will have to admit this is funny
4