Behind the facades: an alternative history of Dublin

Did you know Croke Park’s Hill 16 was once Hill 60, named after a WWI battleground? Or that 30 of Trinity College’s 70 original students had to be native Irish speakers? That Guinness brewed ale, not porter, for its first 19 years? And the role of manure in the great whiskey fire of 1875? 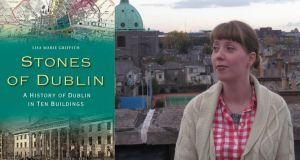 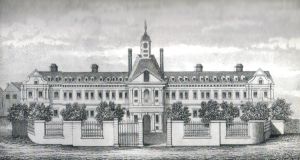 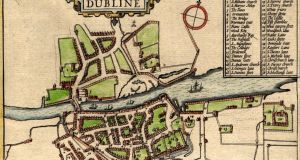 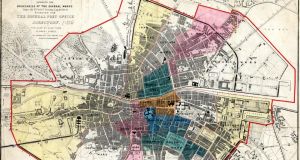 While working as a tour guide in Dublin city centre, covering 2,000 years of Irish history, I began to see the city’s iconic buildings as a gateway to the past. Through the buildings it was possible to build a narrative, to describe past events and to draw a picture of the people who walked the streets in different eras.

Seeing these buildings through the eyes of tourists gave me a fresh perspective, which became the basis for Stones of Dublin: A History of Dublin in Ten Buildings. I sought to tell more than just the story of how and when important buildings were built, but to describe the story of the capital and its people through these structures.

We often overestimate what we know about the city we live in. Few people know that Croke Park’s famous Hill 16 terrace was originally called Hill 60, after a 60m hill that was fought over at the battle of Suvla Bay during the first World War. There was an overlap in membership of the Irish Volunteers and the GAA, and many of these men enlisted in the British army after John Redmond called them to arms in his Woodenbridge speech. The name Hill 60 was in honour of members of the GAA who had fallen fighting for the hill in British uniforms. The name was later changed to Hill 16 to mark the 1916 Rising.

Trinity College Dublin is often viewed as a Protestant institution, founded to promote the Reformation in Ireland. But when it was founded, the university had far broader aims. It was supported by the hierarchy of the Anglican Church, but the university was not a training college for Protestant ministers. The charter states that the university would be “for the education, formation, and instruction of youths and students in the arts and faculties”. There was no religious requirement for entry to the college until 1641, and some Catholics took degrees in the college during this period. (Below:  John Speed’s Map of the City 1610 (Dublin City Library & Archive). 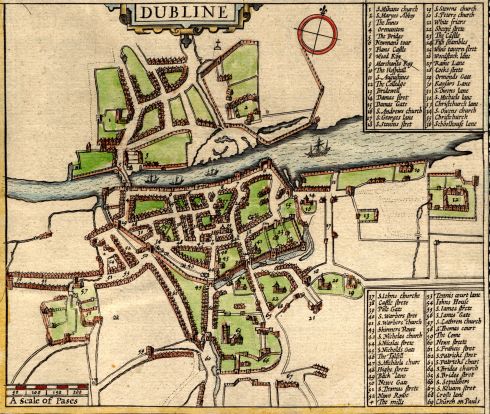 When Narcissus Marsh (founder of Marsh’s Library) held the position of provost of the university in the late 17th century, he discovered that college statutes specified that 30 of the 70 scholars enrolled in the university were supposed to be natives of Ireland and fluent in the Irish language. While Trinity took on scholars that could speak Irish, few of these could write the language. He employed Paul Higgins, a former Catholic Irish priest turned Protestant minister, to teach Irish to the students and to preach in the language once a month. Marsh also ordered that Irish students had to both speak and write the language. Marsh himself led the way, learning the language and attending sermons. Ultimately, the religious wars of the 17th century ended Trinity’s attempts to be open and inclusive, but its early efforts were substantial.

St James’s Gate is embedded in the consciousness of Irish people and many visitors to Ireland, but researching the brewery also uncovered surprises. While Guinness’s advertising suggests that 1759 is inextricably linked with the black stuff, porter was not brewed at St James’s Gate until 1778. Up to this point, ale was produced at the brewery. Porter was a popular drink in London in the early 1720s (it is named after the porters of Covent Garden, who drank this style of beer in large quantities). The drink became very popular in Ireland in the 1760s, and imports into Ireland increased dramatically at the expense of home-produced beers. Eventually, Arthur Guinness developed a Dublin porter to compete with the imported drink. It was an inspired move: Guinness porter became so popular that by 1799 he decided to concentrate all his production on this product. By the end of the 18th century he was exporting to Britain.

As Guinness production increased in the 19th century, so too did Dublin’s drinking problems. The lengths some people would go to for a drink were shown during the great whiskey fire of 1875. A malt house and warehouse in the Liberties area of the city went on fire, which freed whiskey from its barrels and sent it flowing down Ardee Street. When news got out, men and women came into the street to drink the free alcohol. It was reported that men and women had to be dragged off the street by firefighters. The blaze was eventually quenched, and the crowd was brought under control by loading horse manure on to the alcohol on the street. 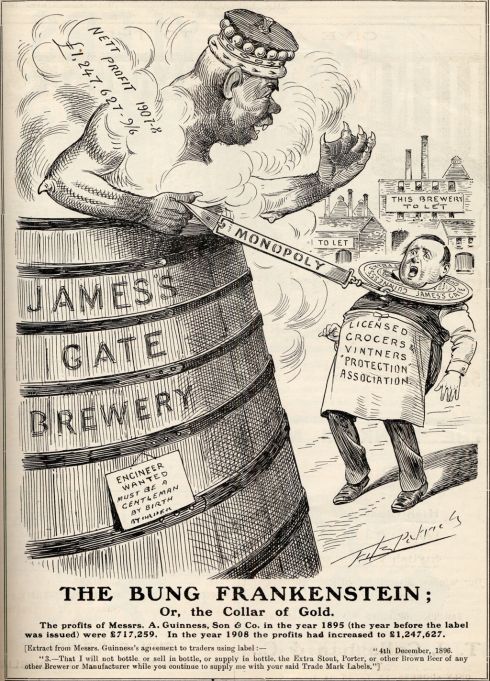 While Guinness was celebrated in Dublin as an employer and for encouraging growth in the city, the success and expansion of the brewery was not welcomed by all. The brewery’s growth in the 19th century saw it outstrip Beamish & Crawford’s production in 1833 to become the largest brewer in Ireland. Its continued growth throughout the century meant that by 1914 it was the largest brewery in the world. But this meant that it was knocking out small Irish breweries and monopolising the Irish market. The image to the left (‘Guinness as King’ (Dublin City Library & Archive) is taken from the Lepracaun magazine in 1908. It depicts the giant Guinness, pushing other breweries around and putting them out of business, and mentions Guinness’s net profits for the year of £1,247, 627 9/6. It also comments on the stranglehold Guinness had over pubs, grocers and even the Vintners’ Association. A guide to Dublin published in 1947 warned tourists they would not find much variety in Dublin pubs: “Draught beers and ales are not much drunk, Guinness being the popular beverage of the masses.” Craft breweries have sprung up across Ireland in the past 10 years; perhaps signs of a fight-back after the stranglehold Guinness has had on Irish markets for almost two centuries.

All old buildings hold secrets and surprises; there is something to be uncovered in the most familiar scene. The next time you are waiting at a bus stop or waiting for the lights to change, look up and around you, take time to notice the buildings around you. Maybe you’ll see something new.

Stones of Dublin: A History of Dublin in Ten Buildings is published by Collins Press and is available in all good bookshops or online at collinspress.ie