Anthony Cronin: Poetry, politics and this all too short life

Cronin has had many lives: as a bar-stool confidant to Irish literary giants, adviser to Haughey and a renowned poet 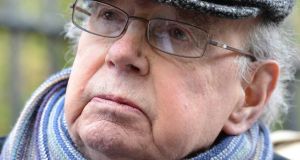 Anthony Cronin: found poetry “not only pleasurable but in a funny sort of way a consolation and an illumination to read”. Photograph: Brenda Fitzsimons 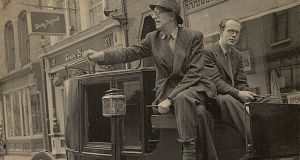 Cronin with Patrick Kavanagh in Dublin 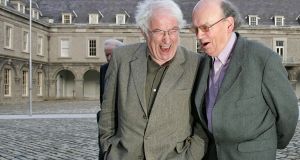 Anthony Cronin is ensconced next to a bookshelf in his living room with a reading light shining over his shoulder. This venerable man of Irish letters is well-dressed in a purple plaid blazer with a sharpened HB pencil protruding from his breast pocket.

Cronin’s poetic masterpiece, The End of the Modern World (1989), expresses scepticism about modern technology, “aids which destroy / True evocation, memory, the past”. With this in mind, I ask permission to tape our conversation. “One must choose every word with those things,” he says.

We are in Ranelagh, Dublin, where Cronin lives with his wife, fellow poet and novelist Anne Haverty, in their logophile’s kingdom. He has joked in the past that here is his querencia: the bull’s safe spot in the ring, where the animal feels at home and can make a stand.

Cronin first took an interest in poetry when sent as a boarder to Blackrock College from his native Enniscorthy, Co Wexford. Having joined the chess club, which got him off the school grounds unsupervised, he picked up a copy of The Century’s Poetry in a local newsagent. “Penguins as a whole were new then. They were cheap, six pence, that did the job.” To the teachers patrolling after-school study, it was incomprehensible that anyone would read poetry for pleasure.

“Denys Kilham Roberts’s anthology was my first introduction to modern poetry. The rest of the stuff was The Charge of the Light Brigade and that kind of thing. I found it not only pleasurable but, in a funny sort of way, a consolation and an illumination to read.”

Called to the bar

After college he was called to the bar, an opportunity he declined. Instead he took a desk job and started frequenting the pubs of the capital. This experience informed his deeply comic novel The Life of Riley (1964), which lampooned the bar-stool intellectualising prevalent at the time and gave voice to the literary aspirants of 1950s Ireland. In biographies of Samuel Beckett ( The Last Modernist, 1996) and Flann O’Brien ( No Laughing Matter, 1989), he corralled his eloquent prose into compelling portraits of two Irish giants of 20th century letters.

As that century warred and wore on, a group of Irish writers carved a modern identity and garnered an international reputation that Fáilte Ireland markets to this day. The Dublin cabal of hard writing and harder-drinking 1950s vagabonds – Patrick Kavanagh, Flann O’Brien and Brendan Behan – were a major part of this.

Friend and confidant to all three, Cronin would go on to memorialise these characters in Dead as Doornails (1976). Here he displays the vibrant writing life he shared while documenting their penurious living arrangements and the sad demise that befell each of them.

He became a columnist for this newspaper, and cultural adviser to Charles Haughey. He often defended Haughey in print, saying he was the first head of government to make the arts an integral part of state policy. When Haughey died, Cronin made a promise to stop defending his legacy in print, saying it was now posterity’s turn.

As for his own role, he says: “Going into the taoiseach’s office as an adviser, I saw the opportunity of doing things and bringing things into being: the [Irish] Museum of Modern Art, the Heritage Council, Aosdána in particular.”

Aosdána was established in 1981. It currently has 248 members and state support from the Arts Council in recognition of their contribution to Irish artistic endeavour. Was the organisation an attempt to mend the State’s relationship with artists after censorship?

“Ireland fell out with its artists almost immediately on its foundation. Censorship was one of the things, but it wasn’t the primary thing. The primary thing was the notion that all artists were anti-religious. There was a clash with the values and established beliefs of the country at large, which had just triumphed, remember.”

Despite his many achievements as a novelist, biographer, critic and cultural adviser, Cronin’s artistry is best represented in his poetry, particularly his longer verse: RMS Titanic, The Minotaur, The Fall, Reductionist Poem and The End of the Modern World all stretch out over tens of verses and flow with the storied ease of a novel.

In these extended poems he revels in his ability to ruminate at length on subjects such as modern existence and the Irish State. He renders cities of the mind in verse full of “true evocation”, probing what it has meant to live through modernity and among its inevitable human failings.

Attuned to the struggles of daily life, his poetry is almost a form of heightened journalism:

The longer verse provided a semblance of normality to his daily writing routine. “I remember a poet, George Barker, telling me that one should write a long poem or two because you could sit down to it every day like a novelist sat down to a novel. They’re a tremendous discipline. It also means that you’re the boss; it’s not the muse that you’re waiting for.”

The first of his long poems was published in the 1960s, a time when a single poem could afford you a reputation.

“I wrote RMS Titanic immediately after seeing the movie A Night to Remember [1958] in the pictures. The poem was about the death of an old school morality or decency.”

Anchors for his poetry

These extended meditations provided more than a daily routine; they also formed the anchors around which his collections of poetry were built. The End of the Modern World has occupied his mind for decades. It was written throughout the 1980s and dedicated to Dermot Bolger. A revised and extended version is due out at the end of this month.

It is an interrogation of centuries of European and classical thought – a sort of psychic history of western civilisation from Roman times right up to a glistening Manhattan – with a familiar Irish squalor omnipresent throughout.

It is a collection of significant events, both international and personal, juxtaposed with timeless works of art in some attempt to place modernity, as Cronin sees it, in a poetic frieze that is built to last. After 179 sonnets he arrives at Manhattan Island with what, in hindsight, is an eerily prescient way to end such a poem.

Cronin is deliberate, measured and scrupulous in his responses. He has strived to broaden his readers’ understanding of this “all-too-short life”. His most recent collection, Body and Soul, has a succinct summation of existence in The Life of Man:

All that excitement, all that fear and pain And snuff out and never be again?

The poem isn’t a statement but a question. “The poem finds it kind of incredible that life should have any significance if it’s not one that’s carried on . . . Why do the events of a short, not-very-eventful life have such extraordinary intensity if it means nothing?”

Cronin’s soul and mind are still engaged with these questions and are as sharp as the pencil in his breast pocket, so don’t be surprised if there are more poems to come. And that is no small thing, as he says, because writing even one poem of value is a minor miracle.