A crowdfunded history of Irish cooking 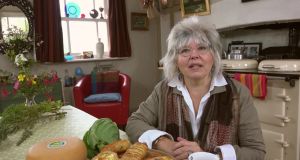 Margaret Hickey: “My overriding concern was to examine, as far back as I could go, the food that poor people produced, caught and ate”

Hands up all those writers out there who’ve submitted a book or a collection of verse to a publisher. Here’s what happens next, right? A swift response arrives: your work is acclaimed or they let you down gently with some constructive criticism and encouragement to try again. Keep your hands up if you’ve found this to be the case. Oh, so nobody, then. You’ve sent out a little bit of your soul, and you hear only howling arctic winds.

To be fair, there are always two sides to any story. Publishers are inundated, they explain; it’s hard to keep going. But they have an instinct for what will sell. Well, not the 38 who turned down Gone With the Wind. Or the 12 who rejected Harry Potter and the Philosopher’s Stone. Or the 20 who didn’t see The Lord of the Flies as a runner. The list goes on.

My first book, a collection of oral histories, Irish Days, was commissioned by a London publisher and sold well enough to go from hardback to paperback. Ronald Blythe was hugely complimentary and I was ready to knock ’em dead with my next effort. A new commissioning publisher loved my proposal – a history of Ireland seen through the prism of food and drink. She signed off on a good advance and I rushed away to write it. Around the country I buzzed, from west Cork to Antrim, interviewing food producers, poring over folklore archives, inspecting a fulacht fiadh (ancient cooking pit) at Craggaunowen in Co Clare, visiting the Ceide Fields, the site of the oldest field system in the world (a thousand years older than the pyramids) and much more. I read extensively. And then the wheels came off the cart. A series of misfortunes, unrelated to me, saw the book unadopted and I put it in a drawer and moped. For years.

Cut to a few months ago, when my pal Paul Kingsnorth told me about Unbound, the London publishers who’d brought out his first novel, The Wake, which went on to be longlisted for the Booker. I submitted my synopsis and a sample chapter, bracing myself for a lengthy wait or worse. I’d been listening to The Messiah, and the words He was despisèd, rejected were ringing in my ears. But in jig time they came back to me and they not only liked it, they thought it was – ahem! – wonderful.

Unbound operates in a way that seems new, and yet turns out to be long established. Before production begins, the writer needs to reach a financial target by urging people to select one of a range of pledges. Once that target is reached, the profits are split evenly. While this notion of crowdfunding is part of today’s zeitgeist, a similar method was employed by Charles Dickens, whose crowdfunding was known as subscription.

In my (typical) case, a short video was made and put up on the Unbound website. In it I talk about Ireland’s Green Larder – a history, not a cookbook, although recipes are dotted here and there. I wrote it for the general public and laced it with accounts of miracles, poems, extracts from diaries, letters and much more.

Details of the ultra-strict diet of the Culdee monastic communities contrast strikingly with an account of the lavish dinner given by a Mrs Delany in the 18th century, the first course alone consisting of a large joint of beef “tremblante”, garnished with small patés, two soups, pigeon pie, stuffed veal with parsley and cream, and casserole with vin de Bourgogne. (She wished to pique her guests’ appetite before the following two courses were brought on.)

That foray into the dealings of the Big House is a rarity in the book, though. My overriding concern was to examine, as far back as I could go, the food that poor people produced, caught and ate. I spent happy hours cooking over a turf fire, suspending pots from the crane in my giant’s fireplace and poking around in the ashes. Taking the precaution of piercing its shell, I buried an egg and raked it out after half an hour, to find the white had solidified but the yolk remained creamy, with a subtle, smoky taste. My kind farming neighbour Tommy gave me a carton of beestings to cook with, and I learned the economy of simple ingredients and minimal tools. All my researches strengthened my admiration for the fortitude, ingenuity and generosity of generations of Irish people who made do with little or less.

The Ireland I studied most closely was rural, but I also look at how the urban poor kept body and soul together, telling how Dean Swift roared at the duplicity of fishwives shouting Salmon! Alive and lepping! and how Brendan Behan, as a young lad, cooked a pig’s head for the granny and what happened next... If you want to know more, it would do you no harm to visit my author’s page, watch my video and then swoop to the side of the page and pledge.

Crowdfunding is no stroll in the park. You must work at it, but it’s so satisfying to see your needle swinging upwards and especially exciting when a stranger pledges, because it’s the merit of the book that has drawn them, and I know they’ll be rewarded with a lively read and a handsome hardback illustrated with specially commissioned line drawings.

With this model of publishing, writers get the chance to write what they want to write and readers find books freed of the straitjacket that commercially driven publishing can impose. Pledgers get access to the writer via regular “Shed” musings, plus the glow of knowing they’ve helped turn a dream into a reality. On the joyous day when the special edition of Ireland’s Green Larder is delivered, you’ll rip open the package and find your name printed at the back of the book you helped create. It’ll feel good.