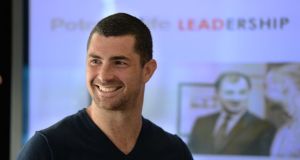 Rob Kearney is taking notes on his tablet at a personal development seminar on the top floor of The Irish Times building in Dublin. Quiet and attentive, he mostly – the impressive physique is hard to miss – blends in with the other participants in this nine-month Be Your Best programme.

The course is a collaboration between this newspaper and Potentialife, the leadership programme developed by happiness expert Tal Ben-Shahar and former McKinsey executive Angus Ridgway. The aim of the course is to bring out the best in people inside and outside of their workplaces.

Kearney is still celebrating back to back Six Nations championship wins. He’s been making his mark at club and international level as a fullback for Leinster and Ireland since his late teens.

A quite reasonable observation is that Kearney has been operating at his very best for quite a while. So what is he doing here?

“In my field now, you are always trying to get these little one percenters from anywhere you can,” the 29- year-old explains. He is looking relaxed, having, with good humoured regret, just turned down the offer of a post-seminar session in the pub around the corner.

“If doing this leadership course does that, and I think it will, then during those tough times in a week or in a game, in those specific moments where it’s really important for leaders to stand up and to be able to grasp that situation and help drive yourself or the team into a certain place, then that 1 per cent could very well be the difference between winning and losing.”

Complacency is the enemy?

“Exactly,” he says. “If your own performance is stagnant you will be passed out by a younger kid and, as a team, other teams will catch up on you, so you have to be constantly improving.”

It’s only 10 weeks into the Potentialife programme, but the module that has stood out for him so far has been the one on mindfulness. When it was introduced Kearney had already been practising similar techniques with his team-mates three times a week, a coaching innovation that was not welcomed by everyone on the team.

“You have to remember the environment,” he says. “You’ve got 30 macho rugby lads and here’s someone coming in to tell us we have to meditate for 20 minutes . . . you’ve got some lads saying ‘are you having us on? You’ve got other lads saying ‘yeah, we’ll try anything’.

“It was compulsory and very strongly advised and the uptake was very good. There were a lot of [American football] NFL teams doing it and they got very good results. It’s all about trying to get the edge on the competition . . . ”

The mindfulness has resonated: “We can so easily drift through a day at 100 miles an hour without just taking a few moments to do so many different things during that mindful period . . . you can be reflective, you can be staying in the moment, you can be rejuvenating . . . our minds work so quickly, we talk to ourselves more than we talk to anyone else in the world so, if we can capture those chats with ourselves, we are on the way to achieving something.”

Lately those chats with himself have included recurring fears about his health after years at the top echelons of international rugby. When I ask him if there is anything he’d change about the sport, for example, he pauses and then reflects on the negative impact the game might have on him in years to come.

“Would I change the intensity of the game and those collisions? Yeah. But it’s impossible to do. And, unfortunately, it’s only going one way. But, you know, I think it’s only in the last few years that it’s really starting to peak out. You look at the game now you wonder can it get any more physical and can the collisions be any bigger? Maybe in 10, 15 years’ time we’ll get a little bit more of an insight into the physical condition of the guys who are playing now.”

But this is your job and you love it, so you can’t stop? “Well just because it’s your job doesn’t mean . . . I could easily get up tomorrow and walk away from the whole thing. But I don’t want to. I love it. It’s what I’ve always dreamed of doing, so I’m not going to do that even if I have a fear of my wellbeing in 10 years’ time.”

He says this fear comes “in waves”. When does he feel it? “You might get up in the morning, you don’t feel great after training, you are stiff. I go shopping for 45 minutes, my back gets sore . . . it just happens subconsciously more than anything.”

He says while concussion may be a buzzword in rugby, the concussions themselves are nothing new. What has happened, he says, is that the governing bodies have become better at highlighting the dangers and there is more understanding and awareness of the potential damage concussions can cause “down the line”.

“Listen,” he says. “If I got four or five really bad concussions in the space of 12 months, well then you are in a very different frame of mind.”

Balancing his business interests – he is involved with the Bridge 1859 Pub in Ballsbridge, a recruitment company Mason Alexander in Merrion Square and has completed an MBA – poses other challenges.

“I have no idea how to run a pub, it’s not my background or my skillset. I’m heavily involved in a recruitment company, again I don’t have a huge idea about the intricacies of recruiting, but there is a little bit of my skillset that can be very beneficial to that firm so I think it’s about being able to recognise areas that you might be able to add value and the ones to avoid and leave to the professionals.”

Growing up on the Cooley Peninsula in Co Louth, at primary school he says he loved Gaelic football but he was also the only boy in the school carrying around a rugby ball. He first rose to prominence during his secondary school years at Clongowes Wood College.

He got the love of rugby from his dad, but it is mothers these days, he says, who make the decision about whether their children play rugby.

“Mum has been very important. If she didn’t want me playing the game I wouldn’t be doing it. She finds it very difficult, especially with two of us. (His brother Dave Kearney also plays for Leinster and Ireland). There’s a candle lit before every game regardless of the country or the continent. And it is tough on her, she doesn’t sleep the night before games, she doesn’t eat on game day . . . I do feel bad sometimes for the hardship that I put her through but again what’s the alternative? There is none.”

He says his bond with his brother Dave is a source of happiness.

“We are very close, we live together and we are very lucky that we play different positions. There is a genuine delight in both of us when the other does well, that’s something we’ve always had and if we didn’t have that the relationship would be very difficult. If he (Dave) has a bad game or he doesn’t get selected for a team, there is a part of me that would almost give my place up for him, I’d take the brunt of it so he doesn’t have to.”

After being “furious” when it first emerged, he is also delighted with the parody @boringkearney Twitter account. He says because of it the perception of him now, from people who don’t know him, is that he is “unbelievably boring ... that I’m home in bed at 10pm, that I set my alarm at 6.39am and do my washing and ironing. Part of me says ‘thanks very much’ for framing my image in such a positive light”.

Does he want to set the record straight?

“I wouldn’t actually consider myself a fascinating person,” he smiles, adding that he prefers “chilling out at home”. He keeps his relationship – he has a girlfriend – private and considers himself an athlete rather than a celebrity “or any of those buzzwords”.

Before he goes, I ask for his thoughts on the same-sex marriage referendum.

“I think it will pass, I hope it will pass . . .I will be voting Yes just because I think it’s important that change happens and life moves on. I think we are a little behind in this country and that’s massively to do with the type of religious establishment this country was . . . we are changing, we are getting there slowly, but I think it’s important we keep catching up on the rest of the world.

“We never want to be seen as the country that is left behind.”

Find out more about Be Your Best/Potentialife programme on irishtimes.com/business/work/be-your-best