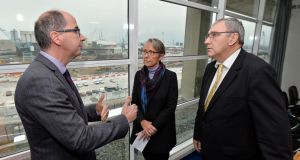 Michael Sheary from the Irish Ports Association with Elisabeth Borne, French Minister for Transport and Meriadec Le Mouillour from the Union Des ports Francais at the signing of a memorandum of Agreement at Dublin Port. Photograph: Alan Betson

France is reorganising its sea ports to manage additional freight traffic from Ireland and segregate it from UK freight arriving after Brexit, French transport minister Elisabeth Borne has said.

She was speaking at the signing of an agreement between the Irish and French ports’ associations in Dublin to look at increasing capacity on existing sea routes between Ireland and France and consider new routes if there are restrictions on the UK landbridge after the United Kingdom quits the European Union in March.

Ms Borne gave assurances that traffic flows coming from Ireland “cannot be penalised by additional checks” that could come into force after the UK’s departure from the EU.

“Whatever happens, we want to be ready whatever situation we face in March of next year,” said Ms Borne after the associations signed a memorandum of understanding at Dublin Port’s head office.

Five million tonnes of goods are transported to and from France every year over land and sea ferry routes through the UK, compared with 2.3 million tonnes moving directly between Ireland and France.

Ms Borne said she acknowledged that the Irish Government wished to continue using the quicker UK landbridge route so she “could not imagine that this route would disappear” but that the French ports had additional capacity to “welcome an increase in traffic” from Irish ports after Brexit in March 2019.

“Whatever happens, we do take into account the fact that Ireland is in the European Union and flows coming from Ireland will not be delayed by additional flows. They are going to stay as they are before, which is why we have preparations inside French harbours,” she told reporters.

She said there were “reasons to be quite optimistic” that the draft EU-UK withdrawal agreement will be approved by EU leaders at a special summit in Brussels on Sunday.

The French minister, who met Minister for Transport Shane Ross prior to the Dublin Port event, said the French government had special executive and operational powers to act quickly in response to Brexit.

“It means that we are very reactive. Very few countries in Europe can do this and being reactive is particularly precious in the context of so much uncertainty,” she said.

Journey times via the UK landbridge can be as little as half those on direct ferries to France, but Ms Borne pointed out that the journey time to some parts of Europe could be halved by taking the direct sea route to France.

At a press conference, the French politician was asked whether there would be specific customs check points built for Irish goods arriving at France’s ports should Brexit break down and the EU single market has to be protected.

Most “roll-on, roll-off” lorry traffic between Ireland and France goes through Rosslare. Some 7,000 containers of “lift-on, lift-off” traffic moving between the two countries goes through Dublin Port a year.

Michael Sheary, the port’s company secretary, said the agreement signed on Friday between the Irish Ports Association and the Union des Ports Français would enhance co-operation between them and how they engage with EU institutions.

“As we face the uncertainty around Brexit, the Irish and French ports share the view that it behoves us all to ensure trade between the two countries continues to flow,” he said.

Trade through Dublin Port has increased by 36 per cent in the past six years. To cope with post-Brexit disruptions, new direct sea freight routes to continental Europe have been set up from Dublin to Rotterdam and Zeebrugge, while additional capacity has been created on existing routes.