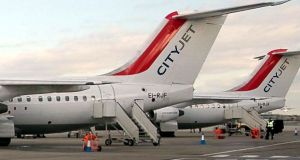 CityJet company has placed a firm order for 15 craft with an option for a further 10.

Irish airline CityJet is set to sign a €900 million deal for up to 25 new Sukhoi Superjet 100 (SSJ 100) aircraft as it moves ahead with plans to renew its fleet.

The Dublin-based carrier announced that it has selected the Italian-Russian built Superjet to replace its current fleet over the next two years.

The deal is valued at $1 billion (€900 million) at current list prices, although CityJet executive chairman Pat Byrne has already said that the company will lease the craft rather than buy them.

CityJet has an agreement with aircraft financier Falko, which will purchase the new aircraft and lease them to the airline. The partnership means that neither the carrier nor its parent, Intra Aviation, will have to fund the purchase directly.

The SSJ 100 will get the necessary certification it needs to fly into and out of London City Airport, CityJet’s main hub, by the end of next year.

The Irish airline will use the first four craft it receives to operate other routes and to service its charter business. Ultimately, the SJ 100 will replace its current fleet of Avro RJ85.

CityJet will be the European launch partner for the aircraft, which is already used in Russia and Mexico.

The planes carry 98 passengers and are the first in their class to offer five-abreast seating. They have a cabin height of 2m.

“This is a very versatile new generation jet which will fulfil our requirements with a capability to operate at smaller airports such as our hub at London City Airport and offer significant advantages in fuel efficiency, emissions ratings and noise reduction,” he said.

Mr Cauceglia said that the deal represented a “great result” for Superjet International that proved the craft’s operational flexibility and operational performance.

Welcoming the deal, Mr Tarasenko, said that it marked a significant milestone in the new model’s development.

CityJet plans to step up its wet-leasing business and expand its existing network of commuter services.