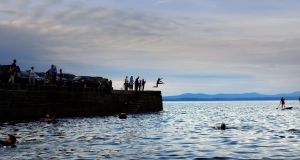 Creevy Pier in Co Donegal. Official figures show that the number of British visitors coming to the Republic fell 7 per cent in the first five months of 2017 Photograph: Bryan O’Brien

Hospitality businesses face the loss of about €100 million this year as the fallout from Brexit hits British holidaymakers’ spending power, tourism chiefs warned on Thursday.

Official figures show that the number of British visitors coming to the Republic fell 7 per cent in the first five months of the year as the effect of a weakened sterling took hold.

Eoghan O’Mara Walsh, chief executive of the Irish Tourist Industry Confederation noted that the Central Statistics Office has calculated that those who are coming are spending 20 per cent less.

“If you expand that out to 12 months, it’s likely to be €100 million less,” he told a British Irish Chamber of Commerce seminar on Brexit and culture, arts, tourism and sport.

“There has been a lot of talk about the uncertainty created by Brexit, one thing that you can be certain about is that Brexit is having an impact on tourism already,” he added.

Peter Collins, honorary treasurer of the Irish Hotels’ Federation, acknowledged that Dublin is doing well, but pointed out that the recovery is only beginning take hold elsewhere in the Republic.

He said that an effective 20 per cent swing in the euro-sterling exchange rate since last year meant that British tourists’ spending power had suffered badly.

Growth in visitors from North America and Australia and the Far East has boosted tourism this year and numbers are expected to beat the 10.3 million record set in 2016.

However, Shane Clarke, director of State agency, Tourism Ireland, confirmed that British tourist numbers so far this year were down 7 per cent at 702,000. He said that there had been 90,000 less British visitors to Ireland north and south this year. “UK tourists are more likely to spend less,” he said.

DAA, the State company responsible for Dublin and Cork airports believes that Brexit will have a negative impact, according to its chief communications officer, Paul O’Kane. He added that DAA was doing everything it could to minimise this.

Brian Kavanagh, chief executive of Horse Racing Ireland, warned that Brexit posed a serious threat to the €250 million earned every year from the sale of Irish racehorses to Britain. “It’s not a market that can be replicated very easily,” he said. “Cheltenham is in Cheltenham and Ascot is in Ascot.”