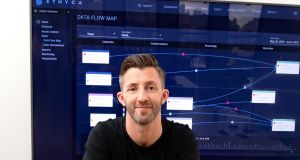 Cillian Kieran: ‘It’s more and more important to consumers that the services they use respect and manage their data ethically.’

Irish-founded privacy company Ethyca has raised $13.5 million in a series A funding round that brings the company’s total funding to $20 million.

IA Ventures is an existing investor, participating in Ethyca’s seed round in July last year. The company’s Roger Ehrenberg is now joining Ethyca’s board of directors.

The New York-based company, started by Irish man Cillian Kieran and Miguel Burger-Caldero, looks after data privacy for companies, helping them to discover sensitive data they hold and manage it, in line with increasingly complex data privacy obligations.

The funding will allow the company to meet the growing demand for its services, with regulations such as Europe’s GDPR and the upcoming CCPA regulations in California that will come into force on July 1st, fuelling interest. That will include new jobs for the team, which stands at 18 – mostly in engineering. The company is hiring for another 10 roles.

“We’re a team of just under 20 people at the moment,” said Mr Kieran. “The investment allows us to grow because there is significant demand.”

“We recognise that there’s a tailwind that follows with the demand based on new market regulations,” said Mr Kieran. “So countries in which the regulations are rolling out tend to be obviously a very relevant place to go.”

“Not only is it necessary to comply with the increasingly complex web of privacy regulations globally, but it’s more and more important to consumers that the services they use respect and manage their data ethically,” he said.

1 Will your boss let you work long-term from home – or from abroad?
2 Plans for €2bn Dart expansion lure Bombardier to Dublin
3 Whistleblower warned EY of Wirecard fraud four years before collapse
4 Ryanair signals possible closure of Cork and Shannon airport bases
5 Google tells workers to return to country where they are employed
Real news has value SUBSCRIBE