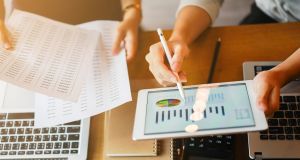 The new fund will invest about 50 per cent of its capital into new early stage companies. Photograph: iStock

Frontline Seed fund III has already begun to invest in early-stage companies, and expects to invest in up to 45 companies over the next four years, with investments ranging from €250,000 to €2.5 million.

Partner at Frontline William McQuillan said the fund would invest about 50 per cent of the fund into new early stage companies, and keep back the remaining funding for later investment in those enterprises.

“The strategy of the fund is very similar to what we’ve done in the past, It’s focusing on early-stage B2B entrepreneurs across Europe, ” he said. “We’re targeting the most ambitious entrepreneurs. Europe is obviously an enormous market, it’s got 26 per cent of all the global B2B software market, but the US is between 50 and 55 per cent of the global B2B software market. If our entrepreneurs in Europe are really globally ambitious, they need to be thinking about the US from day one. That’s where Frontline really wants to focus.”

In return, Frontline takes an equity stake in the company, typically 15 per cent, but it can range between 10 per cent and 20 per cent.

The company identifies targets for investment, but will also find investments through its network and approaches from entrepreneurs.

“In Frontline, 50 per cent of the investments we’ve made over the last nine years have been pre-product, 80 per cent have been pre-revenue, so a huge amount of the ideas we invest in are literally ideas on paper,” he said. “One thing we really care about is investing early, and we have a rule in our investment team that no one is allowed to tell an entrepreneur that they are too early.”

The fund’s investors include the European Investment Fund (EIF), Ireland Strategic Investment Fund (ISIF) and AIB, along with 10 exited software entrepreneurs from across Europe and the US.

Mr McQuillan said he expects to see plenty of investment in countries in Ireland and the UK, but noted the fund was pan European and as such would be casting a wide net.

The new fund comes less than a year after the launch of the $70 million (€58 million) Frontline X growth-stage fund, which supports US-based companies who want to expand into Europe. The venture capital firm’s total funds under management now stand at €250million.

“One of our core value-adds is to help our European companies and entrepreneurs know how and when to scale into North America, and the US fund does the opposite,” he said.

Since 2012, 70 per cent of Frontline’s seed portfolio companies have raised capital from top-tier US venture capital funds.