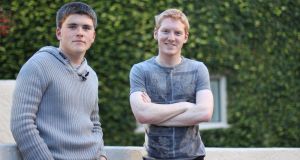 John and Patrick Collison, co-founders of Stripe, outside their offices in Palo Alto, California

The Government’s plan to increase Ireland’s e-commerce market were given a boost today as payments company Stripe officially launched in Ireland.

Founded by Limerick brothers Patrick and John Collison, Stripe aims to make it easy for online businesses to accept payments over the internet. The service has been tested here for the past few months, with Irish tech firms including PCH International, Boards.ie and Tito taking part.

The official launch sees the service become publicly available to businesses in Ireland.

Chief executive Patrick Collison said the company was not trying to take market share from existing payments firms, but wanted to grow the ecommerce market as a whole, bringing areas currently not transacting online into the market.

He described some of the more traditional payment facilitators, such as banks, as “dinosaurs” who did not understand online business.

“The chilling effect on online business is hard to understate,” he said. “Internet business could be so much bigger.”

Ireland is the first country in the euro zone to exit Stripe’s beta phase, although Britain was the first European country to get access to its full service.

Mr Collision said Stripe’s expansion into the euro zone was an important step.

“It’s especially important for countries like Ireland, export countries,” he said. New functions, such as the ability to accept payments in multiple currencies, has been added especially for the European market.

Founded in 2010, Stripe first made its payments platform available in September 2011, launching in the US before expanding to Canada a year later.


Customers include Walmart
It counts major firms including Walmart and Virgin among its customers, alongside start-ups such as Foursquare and Lyft. Irish tech firm Intercom, now based in the US, has been using the service for some time.

Stripe’s first employee, Darragh Buckley, said: “To date, online payments infrastructure in most of these countries, including Ireland, has been dominated by lumbering incumbent banks. Accepting internet payments involved weeks of setup, reams of paperwork, and bureaucratic approval processes,” he said. “We want to fix this.”

The company, which is based in San Francisco and has 62 employees, has also launched beta testing programmes in Germany, Belgium and Australia.