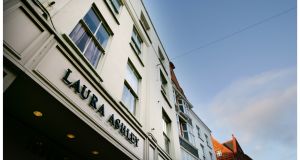 The High Court has heard of hope that the jobs of some employed by the Irish arm of fashion retailer Laura Ashley can be saved following the acquisition of its UK parent. Photograph: Bryan O’Brien

The High Court has heard of hope that the jobs of some employed by the Irish arm of fashion retailer Laura Ashley can be saved following the acquisition of its UK parent.

Ken Tyrell and Declan McDonald of PWC were appointed last month to act as liquidators in a provisional capacity.

The Irish company sought the appointment of liquidators arising out of its UK parent’s decision to enter administration after the Covid-19 pandemic effectively ended a proposed sales process.

As a result, the parent ceased providing the Irish company with any further financial support.

Without that support, the Irish company, which had seen a decline in revenue in recent years, could not survive as it has a balance sheet deficit of over €563,000.

When the matter returned before the High Court on Friday, Rossa Fanning SC said, while the Irish company was seeking to have the liquidators confirmed, there was room for optimism.

In recent days, the Laura Ashley brand had been bought in administration by the US investment firm Gordon Brothers, counsel said.

Gordon Brothers had engaged in a process of due diligence with a view to streamlining the business in Ireland and the UK and that process may result in some of the Irish stores and jobs being retained, counsel said.

Ms Justice Reynolds, noting the cautious optimism expressed to the court in regard to the hope jobs in the business could be saved, confirmed the liquidator’s appointment on the basis the company is clearly insolvent.

There were no objections to the application.

Both the UK parent and the Irish firm had been experiencing financial difficulties in recent years, the court previously heard.

The Covid-19 outbreak has had a catastrophic impact on the entire group’s financial position. In line with all other retailers, the five Irish stores closed in late March.