Forecasts from strategists show bullish expectations have been reined in 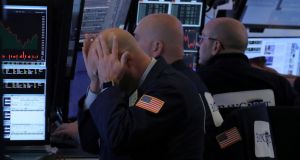 Traders on the floor of the New York Stock Exchange. The most prescient bear on Wall Street in 2018 was Morgan Stanley’s Michael Wilson, who warned we were witnessing a “rolling bear market”. Photograph: Brendan McDermid/Reuters

Investors entered 2018 in exuberant form but it turned out to be a lousy year for global stocks. Will the bears prevail again in 2019? Do market strategists envisage further pain? Or should investors bet on a market rebound after a troubled 2018? The market mood today is very different to 12 months ago. Then, the head of the world’s biggest hedge fund, Bridgewater’s Ray Dalio, predicted investors would “feel pretty stupid” if they were holding cash. Dalio’s take – stocks were the place to be due to an ideal Goldilocks environment (not too hot and not too cold, with above-average growth and below-average inflation) – was shared by a record number of fund managers. The mood was one of mood of “rational exuberance”, as Goldman Sachs and Barclays called it.

Within weeks, however, global stocks had peaked, and a plethora of concerns – trade wars, rising US interest rates, disappointing economic data in Europe and Asia, elevated valuations in the over-owned technology sector – continued to dog markets as the year progressed. Sentiment surveys show the mood among investors today is much more muted, but strategists are cautiously optimistic; the average prediction is for the S&P 500 to gain about 10 per cent in 2019, according to Bloomberg data. Only one major investment banking firm – Société Générale – predicts stocks will decline this year.

Strategists’ price targets should be taken with a grain of salt, however, given that cautious optimism tends to be their default position. Since 1999, they have never once predicted a down year, with the average forecast being a 9 per cent gain. As a result, their forecasts badly miss the mark both in bear markets (stocks halved between 2000 and 2002 and fell by 37 per cent in 2008 alone) and in strong bull market years (think 2013, when the S&P 500 soared 32 per cent).

Nevertheless, it would be untrue to say strategists are nonchalant about the risks that have roiled markets in 2018. There’s no shortage of cautious commentary out there. The position of Barclays – “2019 returns are unlikely to be as bad as 2018” – is hardly a ringing endorsement for risk assets. “The best years of the decade-long economic recovery and market rally are behind us,” it says. Tightening monetary conditions mean risks are “skewed to the downside” and investors should prepare for “more subdued returns” and “persistently higher volatility”.

That’s echoed by Goldman Sachs: stocks should enjoy single-digit gains but risk-adjusted returns are likely to be less than half the long-term average. Goldman recommends investors get defensive by lowering their equity allocations (“cash will represent a competitive asset class to stocks for the first time in many years”) and shifting into high-quality companies. The growing allure of cash is also noted by Bank of America Merrill Lynch. Cash yields “couldn’t hold a candle” to stocks for most of the last decade but that’s no longer the case, with cash yields now higher than dividend yields for 60 per cent of the S&P 500. Excessively bearish positioning and sentiment means stocks may move higher over the next few months but the bull market is winding down and stocks will likely top out in 2019, says Merrill.

Global earnings growth will decline sharply this year; volatility, as measured by the Vix index, is likely to double over the next three years; and the confluence of “idiosyncratic shocks” and “wildcards” that shook markets in 2018 – trade wars, US monetary tightening, widening deficits and geopolitical concerns – means there are “very real risks” for investors. The most prescient bear on Wall Street in 2018 was Morgan Stanley’s Michael Wilson, who warned we were witnessing a “rolling bear market” characterised by initial weakness in emerging markets that gradually rolled through different sectors over time. Wilson remains cautious, saying tightening financial conditions and decelerating growth will result in “another range-bound year driven by disappointing earnings and a Fed that pauses”.

Société Générale is more bearish again, as evidenced by its choice of a waving grizzly bear to adorn the cover of its 2019 outlook. Citing restrictive monetary policy, political gridlock and continued trade tensions, it expects a US recession in the first half of 2020 and predicts the S&P 500 will fall about 10 per cent in 2019. If so, it will have fallen 20 per cent – official bear market territory – from its high point in 2018.

Others are more sanguine. The S&P 500 slipped in 2018 even as earnings surged, resulting in a sharp fall in stock valuations. Historically, years marked by sharp valuation contractions have been followed by average gains of 16 per cent, according to UBS.

Valuations are also cited by Credit Suisse. More bullish than any other major firm, it expects earnings multiples to expand in 2019, driving strong equity gains in the process. Deutsche Bank, too, is relatively cheery: valuations are near five-year lows, suggesting a “sharp slowing in growth and a high probability of recession is priced in”. That’s echoed by JPMorgan: much risk is already priced in so “expect the equity pain trade to be on the upside”.

Excessively bearish sentiment is also cited by Citigroup, whose sentiment metric indicates a “near 90 per cent probability that the S&P 500 is higher in a year’s time”. However, Citi remains cautious towards technology stocks. Being long on technology stocks was the most crowded trade for most of 2018; consequently, fund managers “may need to take down their tech exposure on every rally given overweight positioning when the stocks were on a tear to the upside”.

Europe and emerging markets were the regions fund managers most wanted to overweight a year ago, but they ended up being 2018’s big losers. European indices have chronically underperformed the US since 2010 but Barclays cautions 2019 is unlikely to see the valuation gap between them bridged. Firstly, economic and earnings momentum remains stronger in the US. Secondly, unexpectedly weak US economic data will not drive investors into Europe; rather, Europe tends to catch a cold when the US sneezes, says Barclays, suffering comparable or bigger sell-offs following US slowdowns.

As a result, it expects single-digit returns in both Europe and the US this year. Société Générale is similarly underwhelmed by the case for Europe. Yes, Europe is cheaper than the US, but it’s only slightly cheaper than average as opposed to trading at bargain levels. Like Barclays, it views earnings as key. The only year in the last decade when European earnings didn’t disappoint was 2017. A big rebound is unlikely unless that changes, says Soc Gen. As for emerging markets, these fell into a bear market in 2018 and are increasingly favoured by value investors attracted by their significant valuation discount.

After badly lagging for most of 2018, the region has outperformed the US since October and bulls expect this to continue if the US dollar weakens in 2019. Of course, it’s not a given that the dollar has peaked. Additionally, economic concerns in China and trade tensions remain. As a result, some remain sceptical; Bank of America strategist David Woo, for example, says he wouldn’t touch emerging markets “with a 10-foot pole” due to concerns about market volatility. Of course, no one has a crystal ball. The real merit in perusing strategists’ prognostications is not to divine the future but to assess institutional investors’ current expectations and beliefs. Right now, it’s clear bullish expectations have been reined in but the consensus is the current global growth scare will not morph into something much more sinister.

That means there should be upside ahead if global trade tensions ease and macro data improves, but things have the potential to get messier if a pronounced global slowdown becomes evident in 2019.

1 In this strangest of recessions, what happens next for Ireland?
2 Bank of Ireland sees about 2,000 staff apply for voluntary redundancy
3 Michael O’Leary is the boss you want to lead an airline out of crisis
4 Overhaul of lease arbitration regime would be a game changer for retailers
5 Estée Lauder staff at Dublin airport plan further strike action
6 Ireland’s Covid-19 economy in five graphs
7 Fortnite owner signs multimillion deal to buy Irish ‘kidtech’ firm
8 Legal tech company Brightflag raises €7m in new funding round
9 Bank of Ireland sees more than 1,400 staff apply for redundancy
10 What agriculture can learn from Charles Darwin
Real news has value SUBSCRIBE
Save money on international transfers