Home loans in arrears of 90 days or more rose to 12.3% in first quarter 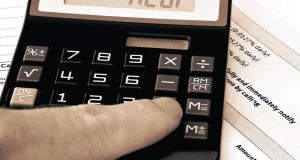 The Government has failed distressed borrowers and is more concerned with protecting the State’s banks, the head of the Free Legal Advice Centre, Noeline Blackwell, claimed yesterday as the worsening mortgage arrears crisis was highlighted by the Central Bank.

According to the latest data on distressed mortgages, the number of home loans in arrears of more than three months continued to rise in the first quarter of the year. A total of 12.3 per cent of loans had fallen at least 90 days behind in payments by the end of March.

Buy-to-let difficulty
Many thousands of buy-to-let mortgages are also in difficulty, with 29,369, or 19.7 per cent, falling into arrears of more than three months compared with 28,366, or 18.9 per cent, at the end of December. Some 910 properties had been repossessed by the end of the quarter.

“The numbers in arrears of more than two years has increased by 12 per cent over the last quarter and these deep arrears will be very hard to clear,” Ms Blackwell said. “There are 95,000 households in very serious difficulties and that equates to hundreds of thousands of people, which is a very big problem in a country of this size and it is not going to be just a debt problem but a major housing issue too.”

David Hall, of the Irish Mortgage Holders’ Association, said there was some surprise that the figures released yesterday were as bad as they were.

“There is absolutely no good news here. The number of people in arrears of more than a year is now well over 50,000. That is a very serious problem and one which is not being dealt with in any way by either the Government or the banks.”

The Irish Bankers’ Federation welcomed the slowdown in growth of early mortgage arrears. It said the figures showed that 79,689 mortgages on private homes had been restructured at the end of March 2013, an increase of 1.8 per cent on the previous quarter.

Fine Gael’s junior minister in the Department of Finance, Brian Hayes, defended the Government’s approach and claimed mortgage arrears was “the number-one issue this year” and that “as we progress this year we have to see progress being made.

“As we see the solutions by the banks being rolled out in a realistic way, we are going to see these figures improve.”

1 Irish people like nothing more than being bribed with their own money
2 Being in Nama regarded as stigma in UK, O’Flynn tells court
3 Election adds to headaches for AIB boss Colin Hunt
4 The Irish economy is thriving but if you’re not feeling it – here’s why
5 Climate apathy in Northern Ireland could impact on the Republic
6 Construction body calls for loan scheme to help first-time buyers
7 Greencore investors urged to spurn Coveney’s €315,000 pension
8 Barclays to cut 100 senior roles as lender seeks to rein in costs
9 Hogan warns Britain on US trade deal as EU set to impose tariffs
10 Labour Court expected to rule on Paddy Power workers’ claim
Real news has value SUBSCRIBE
Save money on international transfers