More than 50 companies to embark on Scotland trade mission 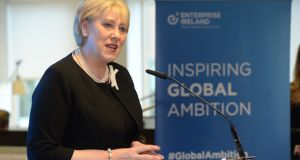 Minister for Business Heather Humphreys will lead the trade mission, which will focus on Glasgow and Edinburgh.

More than 50 Irish companies are to take part in a trade mission to Scotland this week as Enterprise Ireland warns of the “challenges” of Brexit.

Exports in each direction have increased by more than 100 per cent since 2012, while Irish-Scottish trade exceeded £1.8 billion in 2017, up by 130 per cent over the last five years.

Some of the companies taking part in the trade mission are Glennon Brothers, GridBeyond, Xocean, Corlytics, Solgari, Quaternion and AgriSpread, which was the overall winner of the Enterprise Ireland Innovation Arena Awards at the national Ploughing Championships last week.

Minister for Business Heather Humphreys is to lead the trade mission, which will be focused on Glasgow and Edinburgh, and will take place over Wednesday and Thursday.

Ms Humphreys’ itinerary will take in Glennon Brothers’ facility in Troon, as well as a joint event with SSE at the energy giant’s offshore wind centre.

She will also attend a trade dinner at Glasgow City Chamber; pay a visit to the University of Edinburgh; and meet her Scottish counterpart Derek McKay.

The 56 companies travelling to Scotland are based in key sectors such as renewable energy, construction, fintech, agricultural technologies and digital technology.

“While we undoubtedly have multiple opportunities ahead, we also share mutual challenges and foremost among these is Brexit which brings a degree of uncertainty and concern for both our countries,” she said.

“Again, this is an area we can work on with Scotland as a new trading relationship between both countries evolves.”

1 Irish companies restrict travel over coronavirus fears
2 Bogus notion that supply will cure our housing woes
3 Life as a Facebook moderator: ‘People are awful. This is what my job has taught me’
4 Suspicions rife as key Brexit trade talks begin in Brussels
5 Coronavirus rocks financial world as hopes for containment fade
6 Corona beer firm reeling after 8% slide due to coronavirus
7 The Cork butcher’s daughter directing A-list celebrities in Miami
8 Flight attendant seeks High Court injunction against Aer Lingus
9 Coronavirus: Iseq down 11% in five days as global sell-off is worst week since 2008 crisis
10 How well paid do you think you are? Here’s how to work it out
Real news has value SUBSCRIBE