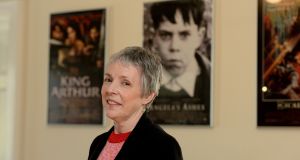 “If you build it, they will come.” It’s a line that might have been written specifically for Troy Studios, rising out of the wreckage that was the deserted Dell complex in Limerick’s Plassey industrial estate.

Studio boss Siún Ní Raghallaigh won’t mind that the slight poetic licence in the line from 1989 movie Field of Dreams where a disembodied voice encourages a farmer and passionate baseball fan to build a baseball diamond in his cornfield to attract the ghosts of long dead players with the words: “If you build it, he will come.” She’s much more focused on ensuring that projects do come to fill the studio space.

Up to 400 people are working on the filming of Nightflyers, an adaptation of a work by George R Martin, most famous for his fantasy novel series A Song of Ice and Fire, which has subsequently been filmed as the hugely successful Game of Thrones.

Space odyssey Nightflyers is being produced by Universal Cable Productions for American broadcaster Syfy. Netflix, which has secured the rights to air the series outside the US, is co-producer. The production is expected to deliver an economic boost of up to €70 million for the local economy in Limerick.

The arrival of Nightflyers is vindication for Ní Raghallaigh, who has been arguing for many years that additional studio space was needed if Ireland was to capitalise on the opportunity in the film and TV sector.

“I think it was no secret that I had been voicing quite loudly that we need more infrastructure,” she says. “And it wasn’t only me. There were oodles of reports saying that same thing. But the problem with Ireland is that lots of people talk about things but you have to go and do things.”

At the time, Ní Raghallaigh was busy reviving the fortunes of Ireland’s first major studio – Ardmore in Bray – which had nearly collapsed in 2012.

Ardmore was owned by Paul McGuinness and Ossie Kilkenny, with Enterprise Ireland holding a stake. The business partners had grown apart over the years, with Ardmore their one remaining joint venture. McGuinness was reluctant to get involved in what would essentially be a rival studio project but Kilkenny bought into Ní Raghallaigh’s vision.

“I felt that it was time to do something,” she says, “and I had been talking to Limerick Enterprise and Development Partnership because they had seen the call that the department [of the arts] and the Film Board put out several years ago about people who were interested in providing studio infrastructure, a call that never, by the way, went anywhere.

“They started talking to me about the possibility of putting something in Limerick. And I have to say that my initial opinion was, ‘Oh my god, no’. However, the more I looked at it and saw the different buildings that they felt might work, and also the can-do attitude of Limerick, the more it seemed a real prospect.

“And then I went to see the Dell factory and I just saw the 70,000 sq ft [of space] with the 55ft height and I thought – ‘Home’. Other people saw a derelict building, I saw a studio. I saw stages. And I could see how this would be a wonderful, wonderful place.”

Situated close to Shannon Airport and with good road infrastructure and strong broadband connectivity, the site offered easy access to film crews looking to fly in and get to work.

Not everything was perfect. There was no crew base infrastructure – the critical network of experienced backroom and support staff that filmmakers scouting filming and production locations require – and, of course, there was the small matter of raising the money to transform the building shell into a modern studio space.

It didn’t phase Ní Raghallaigh. She’d been here before. She is currently chairwoman of TG4 but, back in 1996, she was involved in setting up what was then Telifís na Gaeilge from scratch.

“For Troy, I did a business plan, went out into the marketplace to see if I could raise finance for it. And we did. We raised finance for it and we got private investment in and, with that investment, we refurbished that building.”

Getting the site ready for filming cost €6 million. And that was without considering the cost of the building itself which is owned by Limerick 2030, the strategic development subsidiary of the merged Limerick city and county local authorities.

Headed by businessman Denis Brosnan, Limerick 2030 is charged with delivering €500 million in new infrastructure to attract inward investment and jobs to the area.

Troy has a 20-year lease on the former Dell site. “It’s probably better for us that we have the local council as a landlord,” Ní Raghallaigh says. “The economics of the studio business is not rocket science, you know. But doing something at a lower cost than a completely fresh build, you can imagine the difference in cost.”

That means a quicker path to profit and, for those investors who came on board, some return on their investment. Refurbishment started in January 2016 and Troy’s first client – Nightflyers – moved in last August just a month after the building was ready.

To put that into context, the biggest stage space at Ardmore is just 15,000 sq ft. Before Troy, only Joe O’Connell’s Ashford Studios – where the Vikings series has been shot – could boast a stage as large as 30,000 sq ft in Ireland.

The larger space allows Troy to go after bigger budget feature film work that would have been out of the reach of the more constrained space of, say, Ardmore, where she is still chief executive and which has recently been acquired by investors in the Limerick business.

Nightflyers will be at Troy until June or July and will subsequently have first call on the facility pending a decision on whether to shoot a second series. That will depend on how the production is received when it hits Netflix and Syfy screens later in the year, but the Troy team would expect to hear word sometime in the autumn.

A key part of attracting film projects like Nightflyers to Ireland is the tax credit available. The Government has offered incentives to film-makers here as far back as 1987, though the details have changed on several occasions.

Currently, any production company tax resident here or elsewhere in the European Economic Area can claim a 32 per cent credit against their corporation tax liability.

There is no annual cap on this credit, known as section 481, but each project can claim only on the lower of 80 per cent of the total cost of production or €70 million. Any cost on cast and crew working in Ireland, and on other goods or services sourced here, including post-production work, qualifies.

“There isn’t a company in Europe that doesn’t have a tax credit,” says Ní Raghallaigh. “So it’s not that Ireland’s doing anything different to anywhere else. We’d be odd if we didn’t [have one]. But it’s a very good and competitive tax credit.”

For Troy, and Ireland in general, the UK, particularly London, is a major competitor, especially for US projects.

“They like the fact that it’s English speaking and London is a city that actors, particularly, and directors might want to be in,” says Ní Raghallaigh. “But likewise, Dublin and Limerick, it’s the same thing. It’s English speaking, everywhere is very close by. And there’s availability here in a way there isn’t in London.

“In London, you might be a small fish in a big pond. Here, you’re a big fish in a small pond. And that has its attractiveness because you attract the best local crew. If there’s a production company in town, everybody wants to work on it and that’s a good thing.”

For a new studio, the first production is always the toughest and Ní Raghallaigh says it was no different for Troy “but they’re a great client, and they’re very committed to what we’re doing”.

“I see from talking to people then in Los Angeles, because they know that Nightflyers is in Troy and the experience is good. All of that helps us.”

The studio brings new opportunities to Limerick. Half the construction crew building sets for Nightflyers were local. Overall, a third of the crew involved in the production comes from the area – with a third of that number being trainees.

Troy is working with Screen Training Ireland to expand the film-focused workforce locally. It is too early yet to pronounce Troy a viable long-term success but Ní Raghallaigh is happy with the progress to date.

“I go into Troy and see a couple of hundred people walking in to work every day. That’s the whole point isn’t it? That’s what we’re here to do. And seeing younger people coming in now being trained and all of that. That’s fantastic, that’s the way it should be, and that’s kind of what it’s about.”

Tax hit from Covid-19, O’Flynn’s solutions to housing crisis, and new homes for D8 07:07
Player Wills site: Hines and APG to seek permission for 416 homes 05:48
‘I’ve so many outgoings with family life . . . it puts manners on you’ 05:20
Pilita Clark: A lot of us are losing it in lockdown – but we really shouldn’t 05:00
Developer O’Flynn calls for task force to deal with housing crisis 05:00
Search executive
jobs on irishtimes.com