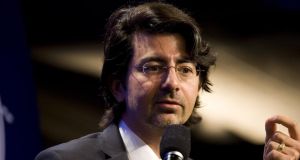 Pierre Omidyar: his wealth was valued at €6.9 billion by Forbes in 2013

Malachy Browne, the news editor of social news agency Storyful, is set to become managing editor and European anchor of Reported.ly, a new media start-up backed by the founder of eBay, Pierre Omidyar.

Mr Omidyar, whose wealth was valued at $8.5 billion (€6.9 billion) by Forbes in 2013, announced last year he planned to invest $250 million in “original independent journalism” under the umbrella of a new media business called First Look Media.

Mr Greenwald is best known for his work with a team in the Guardian who first published a series of reports detailing American and British global surveillance programs based on documents leaked by Edward Snowden.

He previously worked in Village magazine before joining Storyful, the Mark Little founded start-up. Storyful was acquired by Rupert Murdoch’s News Corp for €18 million in December 2013.

Mr Browne could not be contacted for comment last night but his senior position in the new media organisation was revealed in a blog post by journalist Andy Carvin who is also joining Reported.ly.

Mr Carvin said the new media venture’s goal was to “bring global news directly to you through social media – and hope you’ll become a part of our online community.”

International team “We’re an international team of journalists with literally dozens of years’ worth of combined experience as online community organisers, storytellers and curators,” he added.

“We don’t try to send people away from their favourite online communities just to rack up pageviews . . .We want to tell stories from around the world, serving these online communities as our primary platforms for reporting – not secondary to some website or app.”