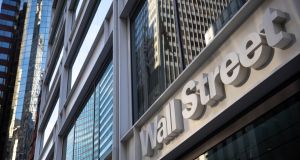 European stocks slipped on Tuesday as losses in defensive sectors offset gains in oil and retail stocks. The prevailing mood was subdued compared to Monday, when the first trading session of 2021 began with a rally in Europe.

Investors appeared to shake off the new national lockdown introduced in the UK, however, and Wall Street opened higher.

The Iseq index fell about 1.5 per cent, underperforming the broadly negative trend across Europe as falls for its biggest stocks weighed on the market. Ryanair fell 2.8 per cent to €14.96 as airlines went into the red, while building materials group CRH finished the session 1.6 per cent lower at €34.59 and Kerry dropped 2.6 per cent to €118.20 as food stocks declined.

But packaging group Smurfit Kappa was also among the fallers, losing 3.7 per cent to €38.34, and it was a lacklustre day for many other Irish stocks.

The FTSE 100 rose 0.6 per cent, bucking the direction of travel for stocks across Europe, with the blue-chip index boosted by oil majors Royal Dutch Shell and BP as crude oil prices inched higher. Royal Dutch Shell surged 6.3 per cent, while BP jumped more than 7 per cent.

Retailers were a bright spot, with fashion chain Next soaring 8 per cent after it said its Christmas sales were much better than expected. Next said full-price sales fell by just 1.1 per cent over the nine weeks to December 26th thanks to a strong online performance.

Shares in Marks & Spencer rose 1.7 per cent and Tesco added 0.5 per cent after market research firm Kantar said British grocery sales hit a record high in December. However, supermarket group Morrisons ended lower despite saying that sales had climbed 9.3 per cent in the past three weeks.

The pan-European Stoxx 600 index fell 0.2 per cent following losses on Wall Street over worries about Senate run-offs in the US state of Georgia. Stocks considered as safe havens, such as utilities, healthcare and food and beverage, were among the biggest sectoral decliners in Europe.

Germany’s Dax index dropped 0.6 per cent with the government looking to extend a lockdown, while France’s Cac 40 slipped 0.4 per cent.

German chipmaker Dialog Semiconductor gained 2.7 per cent after it gave an upbeat fourth-quarter revenue forecast due to strong demand for 5G phones and tablets. ASML rose 0.2 per cent after analysts at RBC and Liberum raised their price targets on the Dutch semiconductor company.

Wall Street’s main indexes climbed in early trading as investors took advantage of the previous session’s slump, while waiting for the outcome of the Georgia Senate run-off elections set to determine the balance of power in Washington.

Energy stocks jumped about 2 per cent on the back of higher oil prices, while consumer staples, utilities and healthcare were the laggards.

Chipmaker Micron Technology rose about 5 per cent after analysts at Citigroup raised its rating on the stock to “buy” on expectations of a recovery in demand and pricing for its chips.

US-listed shares of China Telecom Corp and China Mobile added about 10 per cent each, while those of China Unicom Hong Kong advanced 14 per cent, after the NYSE reversed its decision to delist the stocks.