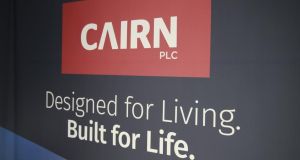 European shares rallied on Wednesday as investors welcomed conciliatory talk from US president Donald Trump on trade and became more convinced that British prime minister Theresa May would see off a leadership challenge.

Optimism also grew that Italy could reach a compromise with the European Commission over its disputed 2019 budget.

The Iseq rose 0.6 per cent, recovering from early-morning losses but still underperforming the major European indices. Bank of Ireland fell 2 per cent to €5.00 despite a ratings boost from Moody’s, while building materials group CRH slipped 0.35 per cent to €22.50.

Ryanair also finished slightly in the red, down 0.3 per cent at €10.79, while Independent News & Media, which confirmed the departure of chief financial officer Ryan Preston, fell 5 per cent to just under 6 cent.

Glenveagh Properties and Cairn Homes both fell more than 2 per cent, with the former down 2.3 per cent at 78 cent and the latter down 2.2 per cent at €1.18. Drinks group C&C was another faller, closing 4 per cent lower at €2.86.

The FTSE 100 ended the day up 1.1 per cent. Heavyweight lender HSBC, which makes a big chunk of its revenue in China, was the biggest contributor to gains followed by BHP and Glencore, boosted by higher metals prices.

The more domestically-focused midcap index climbed 1.9 per cent after a growing majority of Conservative MPs indicated support for May ahead of the no-confidence vote.

Dixons fell 6 per cent, while Superdry plunged 38 per cent after its third profit warning in a year, saying unusually warm weather had hit winter clothing sales. The stock has lost more than 80 per cent of its value this year.

Energy services company Wood Group lost 10.2 per cent after a cautious outlook on contracts. Sainsbury’s shares tumbled 7.2 per cent after the competition watchdog refused to give the group longer to respond to the latest evidence in an inquiry into its merger with Asda.

The euro-zone stock benchmark rose 1.8 per cent, its biggest one-day gain since April. Euro-zone banks gained 2.9 per cent with Deutsche Bank rising 5.8 per cent after a Bloomberg report said Germany was holding high-level talks to facilitate a possible merger with Commerzbank. Commerzbank shares rose 5.6 per cent.

Germany’s Dax added 1.4 per cent, while the Cac 40 rose 2.1 per cent. Italian banks added 3 per cent, led by Intesa Sanpaolo, as prime minister Giuseppe Conte flew to Brussels for talks on the draft budget.

Pernod Ricard rose 5.9 per cent to a fresh record high after news that activist investor Elliott Management had built up a stake in the family-backed French drinks company.

Among the few losers were shares of Zara owner Inditex, which fell 4.5 per cent after sales and profit growth missed market expectations.

Wall Street stocks jumped in early trading, boosted by the technology sector, as indications that Beijing would ease its “Made in China 2025” industrial policy added to positive sentiment arising from Trump’s upbeat comments on trade.

The S&P technology sector gained 2.17 per cent, while the other big boost came from energy stocks, pulled higher by strong oil prices, and health stocks. The laggards were the defensive consumer staples, utilities and real-estate sectors.