Carmaker had been under investigation for role in diesel scandal 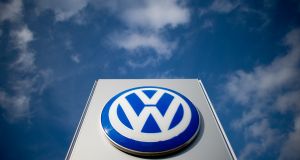 Volkswagen accepted the fine and will not appeal it. Photograph: Getty

Volkswagen has been fined €1 billion by public prosecutors in Braunschweig, near its Wolfsburg headquarters, for its role in the diesel scandal, according to a statement released late on Wednesday.

Prosecutors had investigated whether the carmaker’s top executives neglected duties and gained an economic advantage by installing cheating software that understated emissions in laboratory tests.

The investigation determined that “monitoring duties had been breached in the Powertrain Development department in the context of vehicle tests.” Prosecutors said 10.7 million vehicles worldwide were equipped with impermissible software from mid-2007 to 2015.

“Volkswagen AG accepted the fine and it will not lodge an appeal against it,” the carmaker said. “Volkswagen AG, by doing so, admits its responsibility for the diesel crisis and considers this as a further major step towards the latter being overcome.”

Prosecutors could not be reached for immediate comment. They are hosting a press briefing on Thursday.

The €1 billion fine is the largest penalty seen in Europe so far, though it pales in comparison to the more than $25 billion (€21 billion) Volkswagen has paid for total damages in North America, including a $2.8 billion fine. The €1 billion fine comprises the maximum €5 million penalty plus €995 million for the “disgorgement of economic benefits”.

Volkswagen already pleaded guilty in the US in early 2017 to equipping cars with software that cheated tests and emitted up to 40 times the permitted level of nitrogen oxide in the real world. – Copyright The Financial Times Limited 2018.

Tesco Mobile Ireland signs €2.5m deal with Client Solutions 10:45
Irish waste start-up Kollect sees several revenue streams grow 08:32
Profits at insulation specialist Kingspan rise 12% to €500m 07:20
Ires doubles down on building plan, Dr Pepper for Kildare, and staycations for all 06:30
‘There is still potential in the UK market and that is our focus’ 05:44
Search executive
jobs on irishtimes.com