European shares up on global growth hopes despite Brexit fears 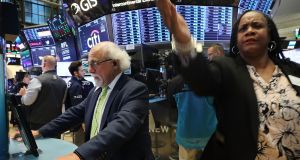 Twitter stock fell after the Washington Post reported that the social media company suspended over 70m fake accounts in May and June. Photograph:Spencer Platt/Getty Images

European shares advanced on Monday as investors looked beyond the growing US-China trade dispute and political turmoil in the UK.

Despite British prime minister Theresa May’s plans for a soft Brexit being hit by two cabinet resignations, the pan- European STOXX 600 rose 0.6 per cent to its highest level since June 22nd.

International Continental Group fell 0.4 per cent to €5.15 as the ferries operator revealed its Ulysses vessel, which operates between Dublin and Holyhead, would be out of service for longer than expected.

Greencoat dipped by 2.4 per cent to €1.025 as the wind energy company outlined plans to sell up to 250 million new shares – starting with an immediate issue of 100 million shares at €1.01 each – to buy more wind farm assets in Ireland.

The index rose 0.9 per cent in its third straight day of gains, outpacing European peers thanks to the slide in the pound as markets continued to benefit from Friday’s strong US jobs report.

The FTSE was climbing “for the wrong reasons”, a trader said, predicting a snap election.

While international, dollar-earning stocks such as British American Tobacco and Imperial Brands gained with sterling’s fall, some domestic sectors suffered as the resignations added to political uncertainty.

Real estate agencies Foxtons and Countrywide were the two worst hit on the small-cap index, down 6.2 per cent and 5.1 percent respectively.

Real estate stocks were the biggest drag on the FTSE 250 too, with student accommodation group Unite down 1.3 per cent and property developer Capital & Counties down 1.4 per cent.

Mining company BHP rose 2.7 per cent after Reuters reported that BP was set to buy its US onshore shale oil and gas assets after an offer worth more than $10 billion.

Industrial stocks Siemens, ABB, and Schneider Electric, which have been among the biggest fallers as trade tensions rise, rebounded to gain 0.6 per cent to 1.8 per cent.

Financials were the biggest boost to the European market, with HSBC, Santander and Credit Suisse top gainers as the sector rebounded, having been one of the worst hit by rising protectionism.

Trade-sensitive luxury stocks Kering, LVMH and Richemont also rose 0.9 per cent to 2 per cent as investors bought back in to the sector.

Air France KLM was a top performer on the STOXX, rising 6.3 per cent after reporting higher passenger traffic for June while a leading French transport executive was touted as its possible new chief executive.

US stocks were ahead in early afternoon trading on Wall Street, with banks and industrial stocks driving a third day of gains as investors looked ahead to a strong quarterly earnings season, setting aside trade concerns.

JPMorgan, Wells Fargo and Citigroup are scheduled to report on Friday, kicking off the second quarter earnings season in earnest.

Twitter dropped after the Washington Post reported that the social media company suspended more than 70 million fake accounts in May and June, which analysts said could be negative for user growth. – Additional reporting, Bloomberg/Reuters

1 Why gift a son now if it eats into his tax-free inheritance threshold?
2 Mortgage arrears: Prevention is definitely better than cure
3 Can we finally say farewell to the scourge of hot-desking?
4 Big Four told to outline plans for audit split in UK by October
5 Deloitte was top Irish dealmaker in first half of this year
6 All parties to High Court hearings told to wear facemasks
7 Flights abroad ban could last all summer
8 Dublin council puts Unicorn restaurant demolition plan on hold
9 Ballymore acquires London shopping centre for €83m
10 Columbia Sportswear defies gloom with first Irish standalone shop
Real news has value SUBSCRIBE

All parties to High Court hearings told to wear facemasks 21:03
Deloitte was top Irish dealmaker in first half of this year 21:03
Dublin council puts Unicorn restaurant demolition plan on hold 19:19
Court told hearing into dispute over Setanta Centre redevelopment not so urgent 18:58
Dispute over €2.95m sale of Georgian property struck out 18:53
Search executive
jobs on irishtimes.com