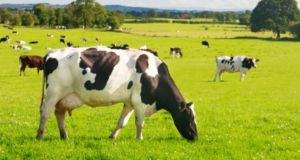 Irish beef has gained access to the valuable US market for the first time in almost 15 years.

Irish beef is to be sold into the US market for the first time in more than fifteen years, the Department of Agriculture has said.

The US banned imports of European beef following the BSE crisis in the late 1990s. Ireland will become the first EU state to return to the US market since that ban was lifted in March.

“This is the culmination of two years of intensive work to prove our credentials as a supplier of highest quality premium beef,” Minister for Agriculture Simon Coveney said.

He said regaining access to the market was “a huge prize” given its size and the fact US buyers were paying more for grass-fed beef than anywhere in the world.

Mr Coveney said Ireland had won an advantage as the first EU member to regain access and that he did not expect other European countries to recommence selling into the US in the near future.

The US imported some €4 billion worth of beef (1.2 million tonnes) last year from countries such as Paraguay and Mr Coveney hoped Ireland would sell some €50-€100 million of the meat into the US market in 2015.

Speaking on RTÉ’s Morning Ireland, Mr Coveney said the US market was a far more “exciting” proposition now than at the time when the ban on Irish beef imports was introduced in the late 1990s.

He said the US was paying some 15 per cent less than the EU market at that point but that this had changed as the American beef herd was smaller now than at any point since the 1950s, meaning increased demand. The market for grass fed beef in the US was growing by 20 per cent a year, he added.

The Minister said Ireland had consistently lobbied for a change of position on the ban and that he had raised the issue with US secretary of state for agriculture Tom Vilsack, citing high international demand for Irish beef as proof of its “quality and reliability”.

Good start to 2015 for @EU_Agri : I congratulate #Irish #beef for getting back on #US market-a vote of confidence after a long wait

The development follows an inspection by US authorities of Irish beef production systems in July of last year, with Mr Coveney saying the news was the culmination of two years of work between his department and its counterparts in the US.

The department said authorities in Ireland were now in a position to approve individual beef plants to export to the US under an agreed set of criteria. It has been in talks with interested producers and said “this work will intensify now in order that the trade can formally commence as soon as possible”.

Mr Coveney said he was contacted about the development by Mr Vilsak before Christmas but that confirmation was only received on Tuesday.

BSE, or Bovine Spongiform Encephalopathy, is a disease that affects adult cattle by attacking the brain and central nervous system of the animal, eventually causing death. The outbreak was linked to cattle eating feed that contained contaminated meat and bone meal.

Also known as ‘Mad-Cow Disease’, BSE can take four to six years to emerge in infected animals. While it only develops in animals, BSE belongs to a family of diseases which can affect humans, with Creutzfeldt-Jakob Disease (CJD) the most commonly known.

The BSE control measures in place in Ireland were substantially reinforced in 1996 and 1997 following the identification of variant CJD in humans.

The Irish Farmers’ Association said it was a welcome development but that “its significance will be judged by farmers securing improved beef prices from the market place in 2015”.

IFA president Eddie Downey said US beef prices had risen by about €1 per kg in the last year to about €4.70 per kg (compared to about €4 per kg in Ireland) and that this “must present a real opportunity for Irish grass-based beef exports”.

The processors group Meat Industry Ireland said US approval would be important from the perspective of Irish beef’s international reputation.

“This is a further endorsement of our food safety standards and our quality management systems,” it said.

It said the US market would likely prove to be a high value but low volume niche market but that there was an opportunity to potentially export greater volumes this year and next while herd sizes in the US were smaller than usual.

“The next steps are to agree a veterinary certificate, clarify outstanding details and progress the approval of additional plants beyond those initially approved. MII will be meeting with DAFM this week to advance these issues.”

Ireland’s EU agriculture commissioner Phil Hogan, who Mr Coveney credited for playing a role in the agreement, said the news was a “vote of confidence after a long wait”.

A joint statement from Mr Hogan and his fellow commissioners Vytenis Andriukaitis (health) and Cecilia Malmström (trade) said the US ban on EU beef imports was “unjustified”.