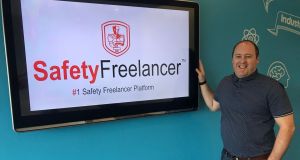 Coyle’s co-founders are his wife, Ashling, and software developer Noel McKeown, and the platform was soft-launched in London in June of this year at Europe’s largest safety event. “SafetyFreelancer is the first global, cloud-based freelancing platform that allows large companies and SMEs to outsource safety administration and related functions online,” says Coyle who has run his own health and safety recruitment company (Coyle Group) since 2011.

“Over the last few years we’d noticed employers struggling with the cost of new hires. There was a bid war for talent which was pushing salaries up, companies were paying fees of 10-20 per cent to recruiters to source candidates and it was expensive and disruptive if the hire didn’t work out. SafetyFreelancer is an alternative way of filling the gap and employers can use it to hire whatever health and safety skill they need when they need it.”

The price of a job will be negotiated directly between the two parties involved and SafetyFreelancer will make its money through commission and a transaction fee. Payment will be held in an escrow account until the work is completed and both parties have validated and rated each other. The platform is aimed across multiple sectors including engineering, oil, gas, energy and manufacturing in Europe, Asia Pacific and the United States.

The platform is free to use and so far about 5,000 health and safety professionals from around the world have signed up. The company is now going through the painstaking process of verifying their credentials. “It’s taking a lot of time but we want to be able to stand over the quality of our freelancers,” Coyle says. “We feel credibility is very important and we want to be sure they are who they say they are and that they have the qualifications they say they have.”

Gavin Coyle has spent all of his career in health and safety, and has an MBS in safety, health and welfare. Ashling Coyle has a background in operations while the company’s third co-founder, techie Noel McKeown, has also been through the start-up process before with the dating app, Teeze.

“The World Economic Forum is calling the rise of the gig economy the 4th industrial revolution and we know that almost half a million millennials do some sort of freelancing today and it’s only going to keep growing,” Coyle says. “In the US 35 per cent of the workforce is freelance while the figure for Europe is about 20 per cent. Demand for health and safety personnel is expected to grow by between 8 and 10 per cent by 2026, so the opportunity is significant. SafetyFreelancer is a clear vertical in the gig economy space that gives people access to global jobs online they didn’t have before and employers access to a pool of safety talent and expertise in any language and time zone.”

Coyle says one area in which SafetyFreelancer can potentially make a big difference to companies is by taking over their health and safety paperwork burden. “In-house safety people spent up to 70 per cent of their time on administration and 30 per cent in the field which is clearly the wrong way around,” he says. “At a very practical level it may mean that on a busy building site the safety person may be stuck in an office instead of being in the middle of operations.”

It has cost over €100,000 in self-funding to bring the SafetyFreelancer this far and the next step is the platform’s commercial launch this month when the first jobs go live.